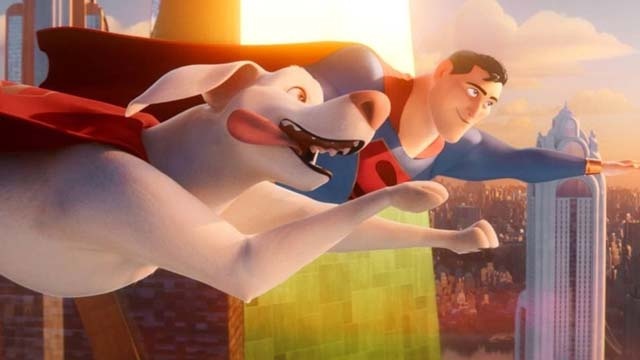 In his directorial debut, Jared Stern, writer of the Lego Batman movie, warms audiences’ hearts with the DC League of Super-Pets. The 3D computer animated comedy follows familiar superhero tropes but will entertain moviegoers who attend for more than just to see the heroes save the day. With a truly star-studded cast, Super Pets delights both children and adults.

Perhaps the biggest stars of the film are real-life best friends Dwayne “The Rock” Johnson and Kevin Hart. The two previously teamed up for two Jumanji movies, and their on-screen chemistry is undeniable. Though the actors only lend their voices to the main dogs of the show, their personalities and friendship is evident.

At the heart of DC League of Super Pets is Krypto aka Bark Kent, voiced by Johnson. The film begins with a scene familiar to Superman fans: Kal-El’s planet is in ruins. His parents project their baby into space, hoping to give him a chance of survival. In this version, Krypto, a Labrador Retriever puppy, jumps into the space craft and lands on Earth with baby Clark Kent (voiced by John Krasinski). The two form a lifelong bond and the film fast-forwards to the present where the duo live in a posh apartment in Metropolis.

All of the DC heroes, such as Wonder Woman, Green Lantern, and Batman, make appearances, especially when the classic villain Lex Luthor attempts to give himself super powers. However, Krypto’s enemy isn’t Lex with all his evil schemes. Instead, Lois Lane (voiced by Olivia Wilde), who Clark plans to propose to soon, is Krypto’s nemesis. In his mind, Clark’s girlfriend stands in the way of his close bond with Superman.

Krypto has always been powerful, having the same skillset as his master, Superman. This has allowed him to feel like the pair’s relationship being more an equal partnership than that of a typical human and dog. Because of this, Krypto looks down on other pets, preferring to see himself as a member of the DC team, not an animal. Thus, Krypto’s hero journey becomes about his learning what it means to be a dog, man’s best friend.

Who better to teach Krypto this lesson than Ace, voiced by Hart, a Boxer with a tough exterior who’s lived in the animal shelter far too long. Though Ace and his shelter friends, a potbellied pig named PB, a turtle named Merton McSnurtle, and a red squirrel named Chip, gain powers by mysterious orange kryptonite, they never forget their true goal: to find people to love them. Being a dog isn’t something Krypto has ever thought about, but Ace knows from experience that dogs will do anything for the people they love.

In the end, Krypto learns what it means to sacrifice for the people you love, which is more than just saving the earth from ultimate peril. It’s letting your best friend get engaged even if it means he’ll have less time for you in the future. Krypto proves beyond a shadow of a doubt that he is a great sidekick and, more importantly, a really good boy.