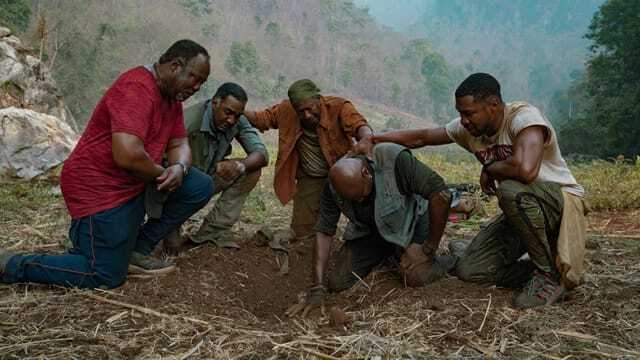 If Birth of a Nation wrote history in lightning, then director Spike Lee wrote it again in thunder and hellfire with his latest joint, Da 5 Bloods. And it wouldn’t be his first time. Ambitious visuals, a long run time and signature dark humor confront white history and tell the largely unspoken war on black people in America.

Paul (Delroy Lindo), Otis (Clarke Peters), Eddie (Norm Lewis) and Melvin (Isiah Whitlock Jr.) are all black veterans of the Vietnam War. Decades later, they return to find the remains of their fallen leader Stormin’ Norman (Chadwick Boseman), as well as the U.S. treasury gold they hid and vowed to bring back as reparations for their people.

What follows is chaos.

From a visual and sound perspective, the film is a critique of traditional “war films.” There are a lot of allusions to popular examples – most notably Apocalypse Now – that have not included the black experience. Lee intentionally exaggerates their visual and sound tropes for his own purposes. For example, in present day, the reunited Bloods are on a boat, gliding through the heart of the jungle. “Ride of the Valkyries,” a staple piece that signifies going to battle, is utilized to comedic effect. Instead of soldiers riding in, there are old men shooting the breeze on a leisurely meander down the river.

The violence and gore of traditional war films is also on the hook in Da 5 Bloods. But the message seems to be at conflict with itself. On the one hand, the Bloods literally mock the violence of characters like Rambo in pop culture. Yet on the other hand, the film spends a great deal of time on an unnecessary, gory shootout with modern-day Vietnamese, with the Bloods opting to work with the landmine detonators.

Primarily, though, the film is about the ongoing conversation – both personally and politically – between the recorded history and present day. One way Lee accomplishes this visually is through changing aspect ratios. The past is a grainy 4:3 ratio and the present is full screen technicolor. Traditional war films dictate that it must be one unifying visual. But Lee rejects that notion. Changing ratios and intermittent footage of important events and people show Lee’s efforts to interrupt a sense of continuity for the audience. Lee doesn’t want viewers to be complacent with the history. He doesn’t want to take them into a hazy, beautiful ideation of the past, but more of an assault on the senses – as it is for these characters, especially Paul.

Lindo as Paul is the chaotic and personal epicenter of Da 5 Bloods. He knows his history. He name-drops Crispus Attucks and Edwin Moses without hesitation. He believes the Bloods were in Vietnam fighting an immoral war for rights black people did not have. His inner turmoil is compounded by his perception of deep-rooted racism in America and the inherent violence of war. Lindo’s acting skills, especially in the final act of the film, are iconic and mesmerizing. Lee emphasizes those skills tremendously in allowing him to break the fourth wall in a close-up; tradition demands that this never happen.

Heroes, even anti-heroes, stand aloof from the audience. They are prodigal pillars held up to impossible, inhuman standards. But Paul’s humanity is on full display for viewers to meet head-on.

Spike Lee has made a legacy of films that endeavor to tell the black experience. From Do the Right Thing to Blackkklansman to now Da 5 Bloods, he tells stories that are simply not being told by other mainstream filmmakers and, as a result, are impossible to look away from.