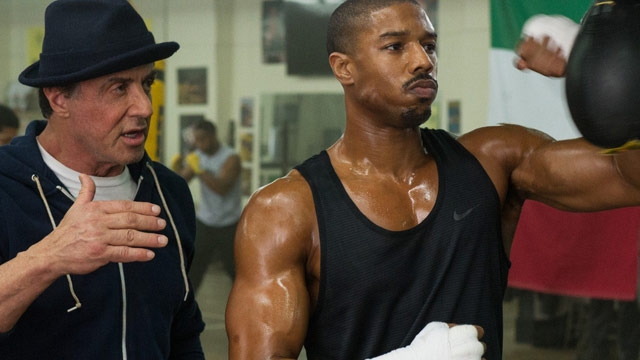 Adonis Johnson (Michael B. Jordan) never knew his biological father, famed boxer Apollo Creed, who died in the ring before his birth. He’s the illegitimate child of the former heavyweight champ, and spent his early life in juvenile detention and floating between group homes in Los Angeles, until Apollo’s widow Mary Anne (Phylicia Rashad) tracked him down and adopted him. Flash-forward to 2015: Adonis fights (and dominates) in unlicensed matches in Tijuana at night, then returns to a promising office job in L.A. the following morning. He resents his father’s legacy and is desperate to make his own name in the ring, but wants to do so without relying on the fanfare of his bloodline.

Against the wishes of his adoptive mother, Adonis quits his job and heads to Philadelphia, where he seeks out the only man who stood toe-to-toe with his father in his prime: Rocky Balboa (Sylvester Stallone). Adonis is a self-taught boxer with a raw style, and he asks Rocky to train him to become a serious contender. The aging fighter begrudgingly accepts after much pestering, and Balboa takes young Adonis under his wing. The public quickly become aware of Adonis’ heritage, and after knocking out a celebrated young fighter, he’s catapulted into the spotlight and arranged to face reigning champ “Pretty” Ricky Conlan (Anthony Bellew). Meanwhile, Rocky’s health suffers as the title fight nears, testing the fortitude of both men as the seventh installment of the Rocky franchise reaches its final act.

The 28-year-old Jordan breathes remarkable life into the title role, balancing the cocksure, boastful attitude of his character’s late father with his own sense of exuberance and loyalty. In addition, his scenes with love interest Bianca (Tessa Thompson) are tender and candid. Jordan escaped the tire fire that was Fantastic Four relatively unscathed, and here he reminds us that he’s a tremendous talent.

Likewise, Stallone is a treasure as the aging Balboa, who’s been beaten down physically and mentally from a hard life. As his health deteriorates over the course of the film, it’s shocking to see him look so withered while steadfastly training the young Adonis. Sly is able to distill the most vulnerable and amiable elements of Balboa, which have persisted throughout the franchise, into an earnest, emotional performance.

Sure, there are rehashed plot points from earlier Rocky flicks; the underdog-boxer tale only has a finite number of routes it can take. But director Ryan Coogler (who previously teamed with Jordan for 2013’s fantastic Fruitvale Station) forgoes scenes of drinking raw eggs and meat-locker boxing, instead helming the movie like any true prodigy would — by making Creed distinctly his own. He taps into the heart of Philadelphia the same way Stallone and John G. Avildsen

did in 1976, even if Rocky’s home looks vastly different nearly 40 years later. Coogler and cinematographer Maryse Alberti use the gritty cityscape as a backdrop for Adonis’ transformation: While the young man grew up fighting all the time in group homes, he was able to live a life of luxury after Mary Anne found him. Thus, his move to Philadelphia signals a shift in his character, and the city represents the type of the fighter he wants to become under Balboa’s tutelage. And just as previous Rocky films focused on Italian neighborhoods in the blue-collar city, Coogler takes Creed into historically African-American pockets of Philadelphia, where Meek Mill blares on gym stereos and wheelie-popping dirt bikes are heard outside.

Despite hailing from Oakland, CA, Coogler (who also co-wrote Creed with Aaron Covington) manages to bring this milieu to life without it feeling forced or disingenuous.

Creed is as artfully crafted as any pugilist flick in recent memory. Adonis’ fight scenes are choreographed with both technical fluidity and a palpable intensity: Heads don’t dramatically snap back like they did when the Italian Stallion fought Drago in Rocky IV — instead, the blows land with a realistic force. With all the potential pitfalls that could have stunted Creed before its opening bell rang, it’s no minor achievement that the pieces come together into such a bold, funny, and satisfying whole. Big-budget, studio-produced franchise films don’t get any better than this.