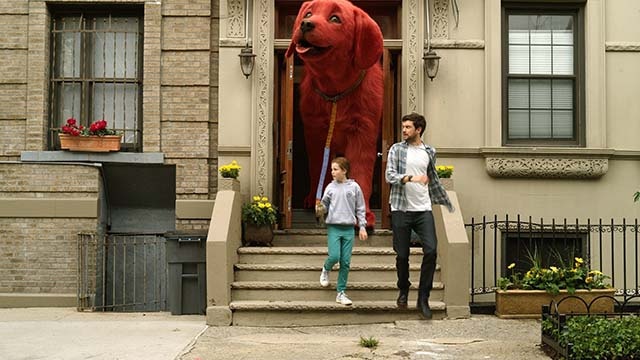 
Clifford, the beloved big red dog, finally makes an appearance in a live action movie. Director Walt Becker delivers a predicable, yet necessary, adaptation of the classic Norman Bridwell children’s books, providing a little something for the whole family. Such a recognizable fictional character from many adults’ childhoods will conjure up feelings of nostalgia, while the little ones will be delighted to see their favorite giant dog in “real life.” As a film, Clifford the Big Red Dog, can really drag in some points. The plot isn’t all that engaging, but Becker does well in crafting a by-the-numbers children’s flick. Whether Clifford is getting into trouble, or one of the goofy human characters comically falls to the ground, the kids will be entertained throughout, and that is really all that matters.

Emily (Darby Camp) is struggling to fit in at her new school. Living in New York City for the first time is overwhelming and a little bit intimidating for her. When her mother goes away on a quick business trip, her irresponsible Uncle Casey (Jack Whitehall) steps in to watch her for the weekend. After a stroll through the park, they wander into a mysterious exotic animal tent, and Emily meets Clifford for the first time. Although an immediate connection is formed, Emily is told she must leave Clifford behind. However, later that night, Clifford magically appears in Emily’s backpack. Going to sleep with a lot of love and a little hope for the future, Emily wakes up to a giant red dog. As Casey and Emily search for an explanation, New York City starts to take notice, along with a few people who would like Clifford for their own. With a little help from Emily’s secret admirer, Owen (Izaac Wang), the trio embark on a journey to find answers about the big red dog.

The film is as simple and straightforward as it gets, a testament to Becker and his writing staff. Clifford the Big Red Dog doesn’t need to be anything more than a fun child’s distraction and showing this gigantic red puppy on screen is entertainment enough. Camp (The Christmas Chronicles, Benji) is the glue that holds everything together, and Whitehall (Jungle Cruise), adequately embraces the constant chaos that Clifford provides. There is nothing spectacular about the acting here, but it fits perfectly within the bounds of the film. Clifford is silly, always getting into trouble, and the film’s target audience will love it.

Watching a childhood staple come to life might be exactly what the older crowd is looking for, but that nostalgic feeling will eventually fade as Clifford the Big Red Dog progresses through its 97-minute runtime. Becker’s latest is aimed directly at the little ones, and you will be hard pressed to find a little Clifford fan who doesn’t love this movie. Filled with bright colors, lots of laughs and a gigantic red puppy, Clifford the Big Red Dog accomplishes exactly what it sets out to do.

The Secret Life of Pets

The SpongeBob Squarepants Movie: Sponge Out of Water—The AllMovie Revi…

The Secret Life of Pets

The SpongeBob Squarepants Movie: Sponge Out of Water—The AllMovie Revi…