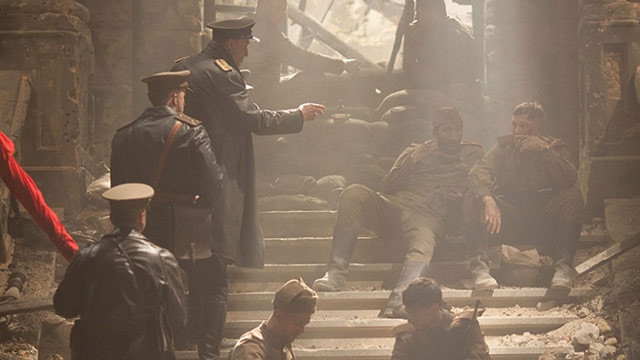 In Stalin’s Ukraine, in the thick of the brutal Holodomor (the artificial famine that killed millions), an orphanage is filled with starving children. Some lay listlessly on stained mattresses, waiting for death, while those who still have their strength savage and humiliate their peers. One boy has had enough. He grabs his meager remaining possessions and runs into the woods, where he’s found by a military patrol whose officers admire his determination to not become another casualty. They give him food and a new name—Leo, like a lion.

Years later Leo Demidov (Tom Hardy) is a war hero, famous for raising the hammer and sickle atop the conquered Reichstag, a successful officer in the MGB (the KGB’s precursor), and is married to a serenely beautiful schoolteacher, Raisa (Noomi Rapace). Death is capricious in a society where strangers denounce each other, and it’s his job to follow up on every lead with patience and severity. But his loyalty to the state is tested when the young son of his adoptive brother Alexei (Fares Fares) is found naked and mutilated along the train tracks. The official report declares he was hit by a train. “A train cannot undress a child,” the unmollified mother shrieks. But any other alternative is impossible: Stalin’s state is a worker’s paradise, and there is no murder in paradise.

There’s a lot packed into this adaptation of the Tom Rob Smith novel of the same name: a murder mystery, political intrigue, an indictment of Stalin’s cruelty, an exploration of how human behavior is shaped by corrupt institutions, a rivalry over a woman, and a meticulously furnished and costumed period drama. (It’s not often movies about Stalinist Russia can be described as “rich,” but the authentic texture of this film, from sumptuous Kremlin drawing rooms to the smocking on a peasant girl’s dress, is exceedingly eye-pleasing.) And, standing out in a cast that includes stalwarts like Gary Oldman and Vincent Cassel, Tom Hardy brings a magnetic, sensual menace that’s almost Brando-esque to a character that’s nuanced yet heroic.

That’s almost enough meaty stuff for an entire TV series, and that’s Child 44’s biggest problem. It’s rare that a movie more than two hours long is criticized for being too short, but there’s just so much crammed in, and the speedy clip of events doesn’t permit the audience to gain a deep empathy for anyone involved. There’s a wasted opportunity here to allow Leo Demidov to become someone like Don Draper or Tony Soprano, a character whose foibles and virtues slowly reveal themselves over seasons and become as layered as the underpainting on a Russian miniature. No one can accuse Child 44 of being short on excitement, but maybe theaters aren’t where its intrigues deserve to unfold.