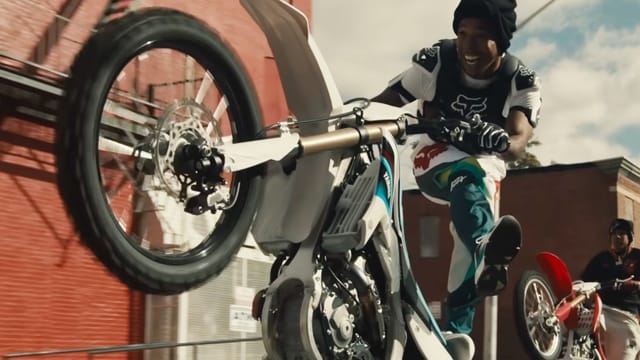 Charm City Kings is an impressive character study, focusing in on relationships more than anything else, all while analyzing how one’s environment can greatly affect how it shapes them. Let’s be clear, Charm City Kings is not particularly well made, from its sloppy camera work to its shoddy acting (save a few great performances). What redeems the film is its excellent story, an almost tangible sense or relationship, and a unique coming-of-age tale that hasn’t really been done before. Director Angel Manuel Soto was able to get out of his own way, just enough, to cobble together a movie that is not only entertaining, but emotionally draining to watch. An extremely slow start may be a turn off to some, but as the plot evolves from “dirt bikes” to “growing up,” Charm City Kings shines.

As a kid growing up in west Baltimore, Mouse (Jahi Di’Allo Winston) gravitated towards the Midnight Clique, a prestigious group of dirt-bike riders who were nothing short of local legends. After Mouse’s brother passes away riding with the Clique, dirt bikes become forbidden in his household. The only way he can experience the rallies are to sneak out with his friends, Lamont (Donielle T. Hansley Jr.) and Sweartagawd (Kezii Curtis), all while risking his social livelihood if he is caught. On top of biking, Mouse shares a passion for animals, and was even able to secure a part-time job as a volunteer veterinarian, with the help of his mentor, Officer Rivers (William Catlett). As summer rolls around, Mouse and his crew happen to meet Blax (Meek Mill), the local “Michael Jordon” of west Baltimore, as Mouse explains it. Blax is an ex-convict, a former member of the Midnight Clique, and the best rider in the city. Trying to get his life back on track, Blax takes Mouse under his wing, teaching him how to build and take care of his very own bike.

What holds this movie back is the inconsistent and amateur feel. Blatantly obvious from the beginning, Angel Manuel Soto lacks organization from scene to scene, as each shot seems to be cobbled together for no particular reason. On top of that, the peripheral acting of the support characters can be comically bad, and even some of the main cast show a complete disregard for competent acting. However, as the scope of the film narrows, it gets infinitely better. All of a sudden, we are shoved into some fascinating character arcs. We have Mouse, a young teen who is fascinated by the Midnight Clique, even to the detriment of his future growth. We have his best friends, his mother, his mentors and his love interest all trying to pull him in separate directions. It’s overwhelming just to watch, and it really helps the viewer live a life in his suffocatingly stressful shoes. Christopher M. Boyd, Kirk Sullivan, and Barry Jenkins all deserve a lot of credit for formulating this gripping story and turning it into something more than rinse and repeat tale of crime and drama.

Charm City Kings gives the audience a vehicle to root for this kid, even with everything seemingly stacked against him. And like any good coming-of-age story, the narrative focuses on relationships, not the individual. Mouse is the focal point of a very entertaining journey, one that is full of every kind of emotion you can think of. Only hampered by some bad filmmaking, Charm City Kings is definitely worth a watch, if only for the storytelling.