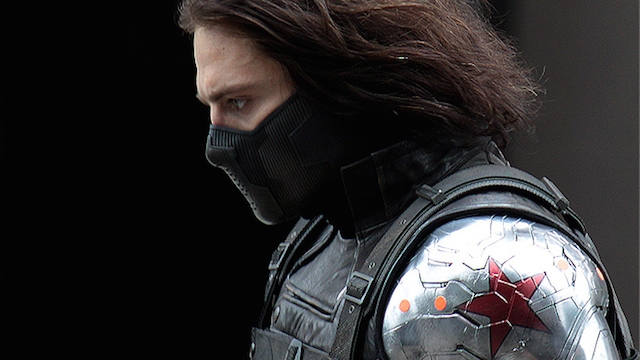 DC Comics should watch its back, because as the creative minds behind the currently untitled Superman vs. Batman movie scramble with rewrites even as it begins shooting in Michigan, Marvel Entertainment continues their successful run on the big screen with Captain America: The Winter Soldier—a superior sequel that, at the very least, stands shoulder-to-shoulder with its whizbang predecessor.

As Steve Rogers/Captain America (Chris Evans) struggles to adjust to life in the modern world, a dangerous rescue mission on a ship in the Indian Ocean leaves him convinced that Nick Fury and S.H.I.E.L.D. may be compromising the organization’s integrity with a new initiative known as Project Insight. A clandestine endeavor conceived by politically connected World Security Council head Alexander Pierce (Robert Redford), Project Insight involves the use of three enormous, heavily armed, satellite-connected “helicarriers” to preserve world peace. Convinced that peace can never be achieved under the threat of violence, Rogers begins to question his allegiance to S.H.I.E.L.D. and his fellow agent Natasha Romanoff/Black Widow (Scarlett Johansson), and forms a casual friendship with haunted veteran Sam Wilson (Anthony Mackie). Rogers is soon thrust back into the fray, however, when a grievously injured Fury entrusts him with a hard drive containing sensitive information retrieved during that initial rescue mission, which leads to Captain America being branded as a fugitive by S.H.I.E.L.D. Now on the run from the very organization he once vowed to fight for, Cap must keep his guard up and figure out whom he can trust to thwart a diabolical plot with direct ties to Hydra—the mystical arm of the Nazi regime that he nearly gave his life to defeat. Meanwhile, a mysterious, superpowered assassin known as the Winter Soldier (Sebastian Stan) is closing in fast, and he’s got Captain America locked in his sights.

In Captain America: The First Avenger (2011), writers Stephen McFeely and Christopher Markus aimed to give the character a compelling origin story, and director Joe Johnston delivered sweeping action set pieces with eye-popping retro style. Flash forward three years, and siblings Joe and Anthony Russo have taken the reigns from Johnston while McFeely and Markus have returned to shape the screenplay. Though in some ways it’s sad to see Johnston go (it’s always nice when a director is rewarded for his success), the truth is that the story this time around is a very modern one, and the behind-the-scenes change serves it quite well. In contrast to Johnston’s almost steampunk visual approach in the first installment, the Russo brothers give this sequel a hi-tech sheen that feels similar to such other, modern-set Marvel efforts as the Iron Man films and The Avengers. Perhaps the only drawback regarding the change of directors is that, although the Russo brothers seem well-attuned to the character motivations and the finer nuances of the screenplay, their lack of experience in big-budget action (they came up through indie comedies and TV sitcoms) occasionally shows when the movie kicks into high gear.

Even so, any comic-book fan will tell you that there’s much more to these stories than explosions and spectacle, and perhaps the greatest strength of Captain America: The Winter Soldier is the fact that Steve Rogers’ struggle is made very believable here—thanks to not only the writing, but Evans’ ability to appear vulnerable despite his formidable physique and fighting skills. In particular, Cap’s relationships with Fury and Romanoff get to the heart of this vulnerability early in the film, and later, once we discover the identity of the Winter Soldier (a foe who could give even the Terminator a fair fight), the movie’s themes of trust and friendship are reinforced in a way that genuinely resonates. Likewise, by tying the story directly to the events of the first picture, and shaking the very foundations of S.H.I.E.L.D. to the core, McFeely and Markus succeed at making this installment an integral component of the Marvel film franchise. Admittedly, the writers are attempting to accomplish quite a bit here, but to their credit the screenplay never feels compromised for the sake of casual fans. And with the exciting introductions of Falcon and the enigmatic Agent 13 (Emily VanCamp), as well as the growing involvement of Maria Hill (Redford’s character without revealing too much, it can be said that he brings some valued gravity to the proceedings.

When you start to consider all of the elements that factor into a great superhero film, it quickly becomes obvious why most fail—an overreliance on action can quickly compromise characterization, while a lesser villain can make the conflict feel trite. With their two Captain America movies, McFeely and Markus have displayed an acute understanding of comic-book mechanics and a keen talent for getting them to run smoothly. If Captain America: The Winter Soldier isn’t the best of Marvel’s ambitious film franchise, it’s certainly near the top of the list, and that’s still a fairly impressive feat. Like the first installment, it may be a bit too violent for younger viewers, and the lack of levity in comparison to the Thor and Iron Man films may strike some as slightly dour, but for its smart balance of story and action, Captain America: The Winter Soldier hits all the right beats.