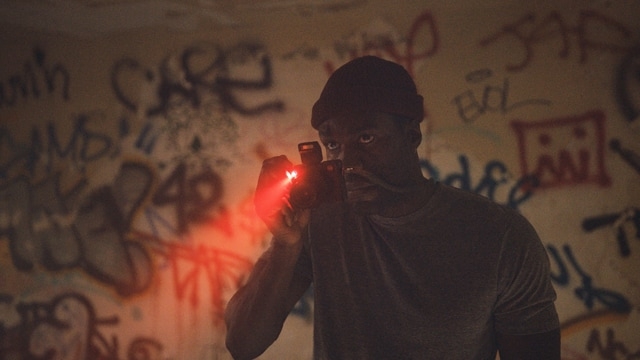 By Steven Earl Yoder
★★★★
Candyman features an ambitious, multi-layered script from Jordan Peele (Get Out), Win Rosenfeld, and Nia DaCosta (Little Woods). Under DaCosta's direction, the screenplay rises above itself, providing an entertaining and compelling horror film that, like the original 1992 film, rises above the typical expectations of the slasher genre.

Anthony McCoy (Yahya Abdul-Mateen II) is a young, rising artist known for a particular style of social-commentary art. When the gallery he is set to display at asks him to find something different, Anthony struggles to break out. That is, until he hears the story of the Candyman, an urban legend from the Cabrini-Green housing project nearby. He becomes obsessed with the history, tracking down details and rendering them on canvas. But when the legend becomes stark reality, will Anthony be able to break free or become a part of it like Helen Lyle before him?

The script is finely tuned as a sequel to the original film while providing a great deal of originality. Most importantly, the screenwriters seem to channel Clive Barker – the creator of the character. The setting remains the same, keeping it a tale of a local legend, albeit not as well-known as when Cabrini-Green existed as public housing. Lack of modern fame doesn't stop the character from wreaking havoc, particularly since there are some who remember. This ties the old story to the new in an admirably developed manner. As with the original Candyman, the concept that horrific, unjust acts can give birth to something even more terrible is a prevalent theme. Clever usage in the title of Anthony's first Candyman artwork ties it all together neatly.

DaCosta's direction of the actors and story keeps the film moving along at a good pace, building the tale's tension as it reaches its inevitably violent crescendo. The audience never loses the allegory for racial violence, but it never feels pushed or forced, either. The actors portray this well, particularly Abdul-Mateen II as the artist genuinely suffering for his art. His performance is as memorable as Tony Todd's in the previous Candyman features.

While this type of film tends to rely on gore, and a few scenes fit this bill, it isn't as excessive as audiences are accustomed to. In some cases, much of it happens off-camera or from a distance. These often add to the chilling effect rather than distracting from it. Brilliant use of light and shadow, plus obscure camera angles, makes this a disturbing film without relying on blood and guts. Another interesting and effective aspect is the use of shadow puppetry to tell many of the historical details of Candyman. The makeup, costumes, and setting use modern techniques but remain faithful to the original Candyman series. It all blends well with an updated environment and a location where truly, times have changed. Overall, the film has the look and feel of a classic and memorable horror movie.

Candyman works equally well as both a horror film and the social commentary at which Peele excels. The exceptional writing, spot-on direction, and great acting from the lead cement Candyman's place as the sweetest of all Universal monsters.