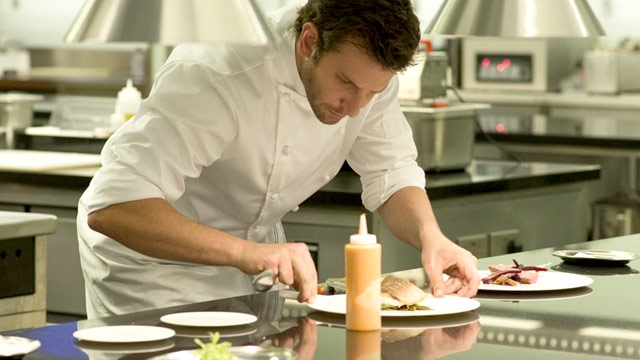 The job title “chef” may include every kitchen laborer from working-class hash slinger to exalted celebrity, but even a brash cuisine wunderkind like Adam Jones (Bradley Cooper) has some humility about his station in life. “God created oysters and apples,” he recalls his mentor teaching him, “and you can’t improve on recipes like that.” He’s got lots of time to think about oysters now, as he spends his days shucking them, like a common kitchen apprentice, in a self-imposed penance in the back corner of a New Orleans raw bar. Once upon a time he’d earned two Michelin stars for his restaurant in Paris, but his taste for drugs stole away everything he’d worked for, including his reputation. He’s clean and sober now, but the sting of his squandered potential still dogs him. As far as he’s concerned, he’ll have redeemed himself only when the restaurant he plans to open in London with the support of hotelier Tony (Daniel Brühl) earns three coveted stars from the notoriously stringent Michelin Guide and their anonymous army of eagle-eyed reviewers.

After arriving in London, Adam gathers his staff, à la the “Seven Samurai” (his words), from short-order shops and rival kitchens across London, a crew that includes Michel (Omar Sy), an old colleague from Paris, and Helene (Sienna Miller), an exquisitely talented and spirited sous chef who despises Adam and everything he stands for. Ensconced in a gleaming new kitchen with total artistic control over the menu, with the backing of people willing to forgive his misdeeds from the bad old days, Adam’s got everything he needs in his pursuit of that last, elusive star. But his fear of failure and lingering shame make him hyper-aware of every perceived imperfection in the food, and when things aren’t flawless enough to soothe his anxiety he takes it out on his staff in screaming, red-faced, plate-flinging tirades.

These scenes, full of fearsome verbal abuse that would constitute a harassment lawsuit in any work environment except in a haute cuisine kitchen, make clear why Bradley Cooper was a wise casting choice. Audiences wouldn’t forgive other actors for being such an unyielding, raging bully, but Cooper allows his famously blue eyes to cast flickers of the fear and shame that’s fueling Adam’s tongue-lashings. (His be-still-my-heart fans will also swoon watching him speak subtitled French, in conversations that account for nearly a fifth of the film’s dialogue.) The movie’s R rating is only for the stevedore language of the kitchen (this picture is in Goodfellas territory for exceeding the MPAA’s minimum threshold for the F-bomb), as there are no explicit scenes of Adam’s former hard drug use or caddish behavior towards women.

In fact, the most lustful gazes in this movie are directed at the sumptuous plates on display. It makes sense that Adam is a recovering addict, because every shot of the food has a mood of astonishment, as if seen through the eyes of someone who’s come out of their addictive sickness to find the world’s every day pleasures finally shimmering with appreciable beauty again. Mussel shells blossoming open in a seafood bouquet atop a saffron pool of bouillabaisse, ganache pouring in a silky chocolate cascade over the surface of a cheesecake, yolk-colored sheets of dough transforming into maiden-hair pasta — it’s enough to make audiences want to lick the screen. (Celebrity chefs Mario Batali, Marcus Wareing and Gordon Ramsay are mentioned in the credits as consultants and, in Ramsay’s case, as an executive producer.) Cooper, Miller and company are believably adept with knifes, and the authenticity of their precise kitchen movements adds to their characters’ depth.

As a movie, this isn’t a Michelin three-star outing. Adam’s character is almost comically bad-ass, with his leather jacket, sunglasses, motorcycle and day’s worth of stubble, like Wolverine but with kitchen knives instead. The plot points follow each other as surely as dessert follows the entrée, including how Helene regards Adam with such frustration and contempt in the opening scenes that it can only mean they’ll end up in love by the last reel. And this story of how a troubled exile achieves healing through a creative partnership with a woman equally devoted to their shared craft is familiar ground for Cooper — Burnt could be re-titled Silver Linings Cookbook.

But this isn’t a simple story of winning the prize at the end, because the prize changes for Adam over the course of his redemption. Burnt may join the ranks of other “we should have eaten before we went to the movies” foodie films like Tampopo, Babette’s Feast and Chef, but as lovely as the dishes on display are, its bigger themes are more satisfying. It’s about the thankless pursuit of perfection versus the endless reward of mindful, devoted mastery, and how an addicted soul shrugs off its final, most toxic craving for external validation in favor of rejoining the human fold. Moviegoers in search of light fare of surprising complexity will offer their compliments to the chef.