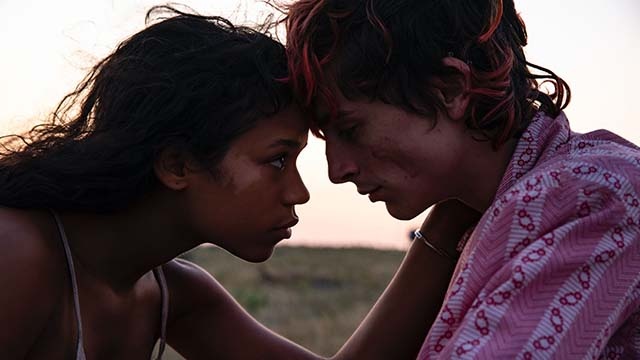 Bones and All is a romantic horror movie directed by Luca Guadagnino with a screenplay by David Kajganich, based on a book by Camille DeAngelis. It stars Timothée Chalamet (Dune), Taylor Russell (Waves), Mark Rylance (The Outfit), Kendle Coffey (Freaky Profiling), Andre Holland (A Wrinkle in Time), Anna Cobb (We’re All Going to the World’s Fair), and Chloë Sevigny (Boys Don’t Cry).

Hannibal (the series) sought to change the way viewers looked at characters with a penchant for human flesh, and Bones and All appears to have the same intention. It is not for the faint of heart—or stomach—as it has plenty of gore, which is to be expected with a cannibal film. However, it carries romance and teenage angst in equal measure.

Bones and All is set in the 1980s and finds Maren (Russell) lost and alone when her father can no longer handle her cravings. Looking for answers, she decides to travel across the country on her own to find them from her mother. After all, if her father doesn’t have these cravings, perhaps she inherited this penchant from her? Along the way she finds that she’s not, in fact, alone. There are other “eaters” out there, including a young man named Lee (Chalamet). They decide to travel together to find answers and to find themselves.

This arthouse film might feel a little slow to some, but Bones and All is best savored like a four-course meal rather than scarfing it down like a fast-food cheeseburger. At its heart, it is about love, alienation, found families, and trusting one’s instincts. All of those themes weave together like a braid. When moviegoers step back, they can see the layers of beauty knitted together amongst the viscera and angst.

Timothée Chalamet has shown his versatility with romantic coming-of-age films like Call Me By Your Name, irreverent movies like The French Dispatch, and epics like Dune. In Bones and All, Chalamet delivers a heart wrenching and intense performance. Taylor Russell might be a fresh new face to some, but she has been on the big and small screens for a decade prior to this film’s release. If viewers didn’t know her before Bones and All, they will certainly remember her powerful performance as Maren. Lee and Maren are clumsy and quiet, preferring not to bring attention to themselves (for obvious reasons) and yet, it is hard to look away from Chalamet and Russell, even when faced with the gore of their cravings.

If there is fault in Bones and All, it is that there aren’t a lot of stakes. While this film isn’t meant to be filled with pyrotechnics and action scenes, the tension could have been ramped up in many different ways. All of the scenes with Sully (Rylance) and the two seemingly random eaters, Jake and Brad (played by Michael Stuhlbarg and David Gordon Green) will have audiences on the edge of their seats because of the friction and conflict they bring to the screen. However, there were many other squandered opportunities.

Bones and All is a slow burn but well worth it if audiences are looking for a different spin on the cannibal genre. The juxtaposition of romance and horror is an interesting one when done well. Moviegoers settling in for a wild and beautiful road trip will find the film mesmerizing, though at times they may wish to watch it in between fingers.

Call Me By Your Name

Call Me By Your Name