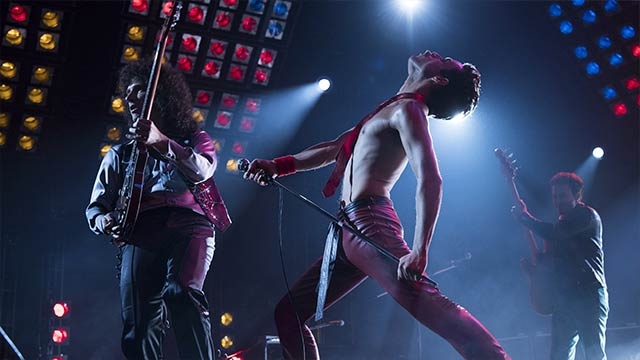 Freddie Mercury was a fearless, troubled, and lonely man. He was constantly looking to belong to something, and eventually found his calling as the legendary front-man of Queen. Bohemian Rhapsody, named after the band’s hit single, is a tribute to Queen, but more so, a tribute to Freddie. Veteran director, Bryan Singer, provides a rough timeline of the band’s greatest achievements, and highlights Freddie’s eccentric lifestyle. Although the film is a memorable tribute to the band, it lacks in depth and substance. At times, it feels as if Bohemian Rhapsody is a drawn-out montage showcasing Queen’s greatest hits album. This is not a bad thing, as it is entertaining and really nails some of the band’s “ah-ha” moments, but where it fails is in its lack of heart. This story should grab the audience and never let go, but it never reaches the emotional plateau it deserves.

Opening in early seventies England, the movie gets right to it, introducing Freddie (Rami Malek) and his rocky relationship with his family. Formally known of Farrokh Bulsara, Freddie’s family were refugees as a result of the Zanzibar Revolution. His father always had an underlying disappointment towards his son, constantly encouraging him to “make something of himself”, instead of frequenting the college pubs. Luckily for Freddie, he didn’t listen. One fateful night, Freddie runs into his future band-mates, Brian May (Gwilym Lee) and Roger Taylor (Ben Hardy), after a show, and convinces them to give him a shot. The band eventually links up with bass guitarist, John Deacon (Joseph Mazzello), and the epic journey towards Live Aid 1985 begins. Freddie’s unusual marriage and friendship with Mary Austin (Lucy Boynton) are also highlighted.

Queen was not the typical rock band, always trying to experiment and deliver something unique. Bohemian Rhapsody does a good job showing the band’s mindset, but never really dives in to the details of what makes them click. The only person who is properly fleshed out is Freddie, as the film is meant to be a biopic, while the rest of the band members are mostly ignored, unless there is a disagreement. It would have been nice to see some depth added to these other characters, but Singer and his writing staff make the decision to fast forward through Freddie’s life, accentuated by the band’s memorable soundtrack.

Malek’s showmanship and performance are impressive and convincing. It is no secret that Freddie’s stage presence and mannerisms are unique, and Malek is the perfect actor for this challenging role, bringing character and life into a rather pedestrian script.

Bohemian Rhapsody is a cookie-cutter biopic that never really takes any chances. Fans of Queen will most likely not learn anything new about the band but will be entertained by the live-action greatest hits soundtrack playing out on screen. Even after all the usual tropes and regurgitated content, it is still fun to watch. What Bohemian Rhapsody lacks in emotion and inspiration, it makes up for in entertainment. Maybe one day we will get a movie that takes a deeper dive into Freddie Mercury’s life, but for now, this will have to do.