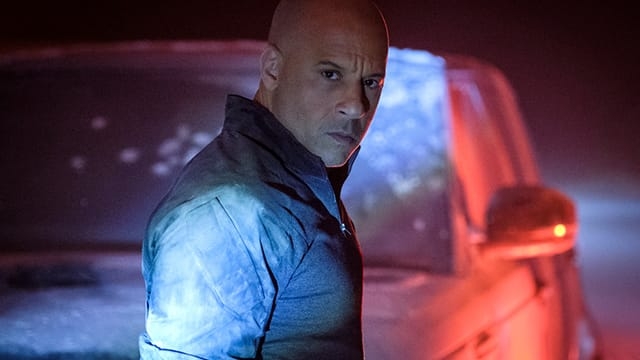 Bloodshot is a superhero origin story about a former combat soldier whose body has become almost indestructible due to some nano robots that have been injected into his system to save his life. With his super strength, and newfound ability to repair himself during battle, the bad guys won’t stand a chance – as long as he can figure out who the bad guys are.

When Ray Garrison (Vin Diesel) finishes up a special ops mission, he takes a much-needed vacation with his wife Gina (Talulah Riley). Unfortunately, he’s not completely off the radar, and both he and his wife are murdered by a baddie with an affinity for dancing and lip-synching while he kills people.

Waking up in a lab run by Dr. Emil Harting (Guy Pearce) Ray learns he’s been brought back to life through nanotechnology. Little tiny robots called “nanites” live inside his body which make him incredibly strong, as well as heal any “tissue” when grievously wounded. He also discovers his new code name is Bloodshot, and that he’s part of a team of cyber-enhanced humans with special traits, including KT (Eiza González), a sexy former Navy swimmer who can’t keep her eyes off him.

Now able to punch through cement columns, take multiple bullets and even withstand explosions without dying, Bloodshot wants to go rogue to find and kill the man who killed him and his wife. But there are more problems in store for him when he discovers the limitations of his new programming, and he tries to find out whether his memories are real or implanted.

First time feature director Dave Wilson shows competence with the basics, and he allows the computer graphics to do the heavy lifting. There’s not much going on acting-wise, not that the action-first script allows it, but the humor lands at the right moments and the moderately dull scenes at least head somewhere, even if they are without big payoffs.

Writers Jeff Wadlow (Kick-Ass 2) and Eric Heisserer (Bird Box) adapted Bloodshot from a Valiant Comic of the same name, created by Kevin VanHook, Don Perlin, and Bob Layton. Playing it safe, they’ve taken the robot-superhero concept and tried to build a franchise without offering any good reasons for people to want to see any sequels. A possible big reveal only leads the film back to a slightly monotonous rehashing of better films from which their ideas have been heftily borrowed.

Ultimately, Bloodshot delivers plenty of frenetic, graphically enhanced action. However, it feels like the filmmakers took interesting elements from Big Hero 6, The Bourne Identity, and Terminator, and made something with less impact. The marginally interesting, though see-through plot reveals the true philosophy behind the film, which is: if the only tool you have in your kit is a hammer, then make it a really big hammer and swing hard.