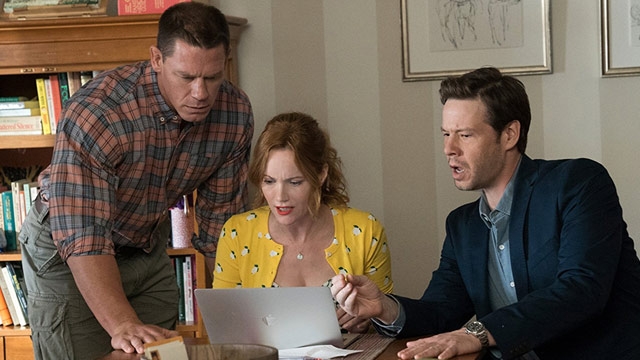 Writer turned director Kay Cannon (30 Rock, Pitch Perfect) has teamed up with Brian and Jim Kehoe (Overachievers) to create Blockers, starting with the male raunch-com and teen sex formulas, and attempting to build something that will appeal to everyone. Unfortunately, while well intended, much of the movie falls flat until the final act.

Hunter, Lisa, and Mitchell met nearly twelve years ago on their daughters’ first day of school. Now, as the girls (Sam, Julie, and Kayla respectively) are about to graduate, the teens have made a senior prom night sex pact. When their parents accidentally find out about it, the adults reveal their own personal insecurities in their attempt to prevent the acts from happening.

One would think that the hilarity that is typical of films like this would pour from a film co-produced by Seth Rogen, and it is refreshing to see that, for a change, the girls are in control of the sexual potential while the boys are the background characters. But so much time is spent setting up the premise without including much in the way of laughs that it sets the tone for most of the film. It is not until the final act that more than an occasional chuckle comes.

Perhaps not so coincidentally, this is when the film grows a heart and makes the viewer care about the parents, their insecurities, and the feelings they have kept inside for twelve years. If the script had delivered just a little of this earlier instead of providing nothing but stereotypes, it could have risen to become something memorable.

What is memorable, however, are the girls. Admirably played by Kathryn Newton (Julie), Geraldine Viswanathan (Kayla), and Gideon Adlon (Sam), they successfully portray teenage angst and insecurity – and how they react to overprotective parents – with exceptional style. Viswanathan is the standout of the three by leaps and bounds, partly because of the depth of the character compared to the others, and partly because of her father, Mitchell.

In Mitchell, WWE wrestler-turned-actor John Cena has given us an unexpectedly perfect execution of a neurotic father. Nearly every memorable comedic moment involves him in one manner or another. Leslie Mann as Lisa (giving us reminders of her role as Ursula in George of the Jungle) and Ike Barinholtz (Suicide Squad) as Hunter give adequate performances, but Cena surprisingly steals the limelight in their shared scenes.

When we do finally get to the third act, a script worth paying attention to coalesces. The parents start talking about parenthood, the daughters start really thinking about what they are planning, and this leads to a greater understanding between everyone. It is refreshing to see the reality of being on the verge of adulthood tackled in a more serious manner than most films of this kind. The acknowledgment that teens “get it” more than parents realize instead of just relying on one slapstick element after another to close out the film actually improves the humor rather than detracting from it.

Very little stands out about the technical portions of the film. The soundtrack is what one would expect, as are the direction, camera, and (especially) the locations. They neither add to nor detract from the film, with one memorable exception. There are a couple of unexpected scenes at the home of the parents of Julie’s date, the latter being one of the better moments in the film and leading to a small Easter egg later.

Blockers is not going to change the film industry and certainly won’t have the staying power of Porky’s or Revenge of the Nerds. But it does provide some fun entertainment, and an opportunity for other directors and scriptwriters to see that this type of film can include some thoughtful moments without losing value… and perhaps even increasing it.