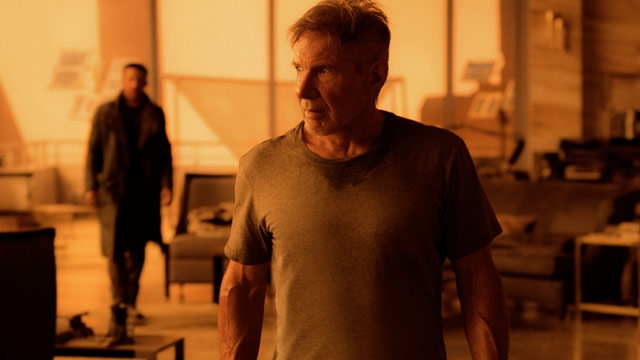 Blade Runner 2049 is a stunning cinematic experience that’s easy to admire, if not exactly love. Director Denis Villeneuve, who helmed last year’s Oscar-nominated mindbender Arrival, ably takes the reins from Ridley Scott (an executive producer here) and expands on the ideas and questions raised in Scott’s 1982 original: What does it mean to be human? And is being human any better than being a human-like robot who is productive and thoughtful, and has feelings, desires, and ambitions just like anyone else?

At the end of Blade Runner, viewers were left wondering if LAPD cop Rick Deckard (Harrison Ford), whose job as a blade runner was to “retire” rogue replicants, was a replicant himself, especially after he fell in love with one. Now, 30 years later, Deckard is missing, and there’s a new blade runner in smog-shrouded and snowy Los Angeles. He goes by K (Ryan Gosling), and as the movie opens he lands his flying Peugeot on a small California protein farm. He’s there to retire replicant Sapper Morton (Dave Bautista), but just before he’s able to do so, Morton utters, “You’ve never seen a miracle.” It seems like a throwaway line at the time, but it’s one that will echo throughout the story. In fact, the miracle Morton refers to could break the world, according to K’s boss, Lt. Joshi (Robin Wright, tough and terrific), and start an unprecedented war. K’s job? Find out what or who this so-called miracle is and destroy it.

K’s investigation, which takes him from the seedy streets of L.A. to a massive and massively populated garbage dump that once was San Diego to an eerily desolate Las Vegas, unfolds at a slow, deliberate pace, much like the original film. But at 163 minutes, 2049 is a bit overlong and would have benefited from more judicious editing. While Villeneuve and cinematographer Roger Deakins continually fill the screen with one jaw-dropping image after another, after a while one wishes the pair had embraced a more minimalistic, less-is-more artistic approach. The movie is never boring, but the story’s rather slight central mystery doesn’t warrant such an excessive running time. 2049 does delve deeper into the humanist questions it poses than its predecessor, but one wishes it had explored these themes even further. The filmmakers are more content to razzle-dazzle us with the astonishing dystopian world they have created, rather than plunge headlong into serious issues regarding artificial intelligence, slavery, sex, personal identity, and the nature of God. Steven Spielberg’s A.I., Spike Jonze’s Her, and Scott’s recent Alien: Covenant all take a deeper, more thorough dive into these issues than Blade Runner 2049.

That said, 2049 is pure cinema and a must-see for serious moviegoers. It’s also a treat to see Ford reprise his Blade Runner role after 35 years. Unfortunately, he doesn’t show up until very late in the film, but his appearance is worth the wait; when Deckard emerges, the story really ignites and shifts into a higher gear. Gosling is also good in a reined-in, subdued performance, as is Jared Leto, as A.I. pioneer Niander Wallace, who serves as the movie’s resident bad guy. Wallace wants the “miracle” for himself and will kill to get it. Sylvia Hoeks is genuinely frightening as Wallace’s deadly replicant assistant; and Ana de Armas, as K’s live-in companion Joi, is heartbreaking. She turns out to be the most human of anyone, even though she’s a hologram.

At one point, Lt. Joshi tells K that “we’re all just looking out for something real.” And that’s ultimately what Blade Runner 2049 is about: Human connection in a world where technology, instead of bringing us closer together, has only isolated us further. The movie sets itself up nicely for a sequel, and here’s hoping the next film, if there is one, burrows deeper into the thorny “A.I. vs. humanity” issues only touched upon here. And that we don’t have to wait another 35 years to see it.