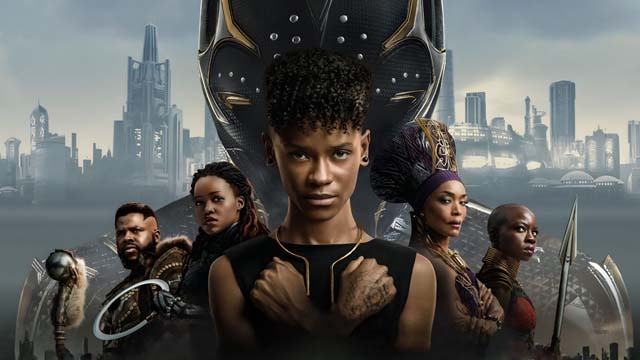 After their success with the first Black Panther film, writers Ryan Coogler and Joe Robert Cole are back with the sequel, Black Panther: Wakanda Forever. Under Coogler’s careful direction, the Marvel Cinematic Universe expands again, bringing Prince Namor and his people to the screen.

King T’Challa has died, and his sister Shuri (Letitia Wright) is wracked with guilt because she could not find a cure for his illness in time to save him. After a year, her mother, Queen Ramonda (Angela Bassett), insists that Shuri accompany her to a ritual commemorating that. But instead of letting go of her grief, Shuri admits to her mother that she wants to burn the world. Their discussion is interrupted by Namor (Tenoch Huerta Mejía), who has managed to slip by all of Wakanda’s defenses undetected. He tells them that, as the only other country with vibranium, Wakanda should ally with him against the surface world. But he also gives them an ultimatum – if they do not join him, he and his people will destroy Wakanda. Shuri is faced with a choice: honor her brother’s peaceful ways at the risk of the Wakandan nation, or take advantage of her desire for vengeance and ally with Namor.

Coogler and Cole open the film with a funeral. Clearly, this sendoff is as much for the late Chadwick Boseman as it is for T’Challa – and both receive the respect and dignity they deserve. After this, they jump into the story they had to reconceptualize after Boseman’s untimely death. Like the well-rounded place they created with Wakanda, their concept for Namor’s world, Talokan, is equally rich and beautiful. However, those familiar with the original comics might balk at the fact that it is not Atlantis, and rather than be their own people, the Talokans are of Meso-American origin. They shouldn’t balk too much because it provides a wonderful background for Namor’s anger; without it, his appearance wouldn’t make as much sense. The script is primarily solid, but there are a few bumps – mostly in what seems to be an attempt to include everything, which detracts from the more important storylines. This is most notable in the fight scenes when the camera moves not only through the action but also through several simultaneous fights. The other problem with the story is that there are characters with no background to quantify their sudden abilities, particularly their capability of standing against individuals with a lifetime of training.

The actors, seasoned and new to the franchise, are exceptional. Both Wright and Bassett’s ability to show their determination, hurt, and rage is fantastic, and they play off each other well. Huerta Mejía channels the smoldering anger and hatred at humanity that represents the earliest of Namor’s appearances in the comics.

The special effects, and there are a lot of them throughout the film, are seamless but often overwhelming. It is a case of too much of a good thing. Fortunately, this is somewhat balanced by the fantastic landscapes of Wakanda and Talocan. During and even after the film, these are worlds and peoples that actually exist, with their own cultures and backgrounds. Because of this, they quickly become places the audience wants to survive, immensely enhancing the tale. The soundtrack greatly enriches the two cultures from the funeral right through the end credits.

Black Panther: Wakanda Forever doesn’t quite meet the quality of the first film in the series, but it does stand well as both a sequel and something original. The audience will be swept up in the story if it can overlook the few flaws. Despite the changes required to work around Boseman’s death, everyone involved can proudly say, “Now is our time.”