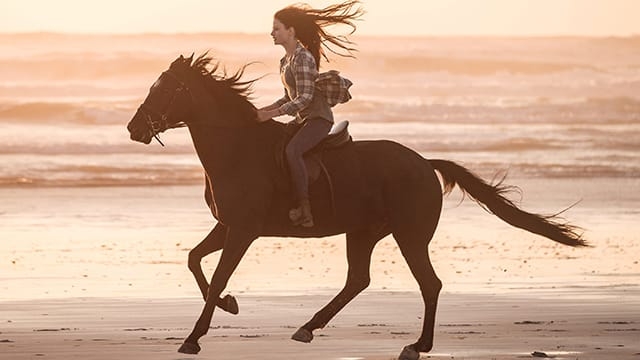 Ashley Avis (Adolescence) takes on the double duty of scripting and directing Disney’s new version of Anna Sewell’s classic horse tale, Black Beauty. But instead of making a period piece, she modernizes the story and manages to do it with style and respect.

Jo Green (Mackenzie Foy) has been orphaned and has no choice but to live at the ranch where her Uncle John (Iain Glen) trains mustang rescues. It is the very opposite of the life she would like, so she alternates between withdrawing and lashing out. That is, until a unique bond forms between her and a black mustang with a white star (voiced by Kate Winslet). Together, the two of them learn to survive in a world neither would have chosen.

With the daunting task of modernizing the story to meet the fan bases’ expectations for Sewell’s novel and the 1946 classic film, Avis manages to walk this tightrope quite well, providing a necessary update to the story. In doing so, she keeps the messages of animal welfare, personal responsibility, patience, and the rewards of remaining virtuous relevant. In the cases of smaller incidents, the efforts can be brief and a little ham-fisted, but no character who is cruel escapes karma, and none that are kind forfeit rewards. The very short conflicts on these are not significant as the film’s focus is Beauty and Jo. Aside from some of the encounters being compressed, presumably to remain within a specific running time, the script is very well managed.

Other than Beauty, voiced through narration cleanly, clearly, and with a touch of innocence by Winslet, the only actor with much screen time is Foy. Her portrayal of the hurt, angry, and brooding Jo is very effective – almost to the point of not liking the character. But Avis keeps the script focused, turning the audience’s feelings about Jo at just the right moment, and turning Foy’s efforts there as well. It is an admirable effort by the young actress.

The sets are beautiful, particularly the long shots of the countryside. It is unfortunate that they often cut off after only a few seconds and very likely would have benefitted from panning in rather than an abrupt scene change. One thing of note is the subtle efforts to make positive scenes bright and negative moments dark or frantic. It gives the viewer a small clue what to expect, but not in a way that makes the film predictable.

The updated Black Beauty remains a wonderful story of the rewards of morality and compassion and the penalties of lacking these merits. All of this is wrapped up in a nod back to the older, more familiar, Disney style of live-action. Anyone with horse sense is sure to enjoy this remake.