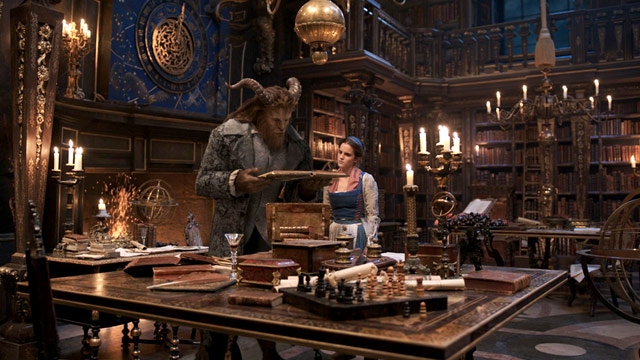 A word to the wise: If you’re a glam-rock fop for whom life is one powdered-wig masquerade after another, don’t scorn the crone who comes to your door begging for shelter in exchange for one perfect red rose. Don’t you read fairy tales? It’s always a sorceress in disguise, and if you’re not careful you’ll end up like the Beast (Dan Stevens), perpetually cursed to look like a horned Nancy Grossman bust crossed with Jo-Jo the Dog-Faced Boy. The curse can be lifted by true love, but true love is hard to come by when you and your entire retinue of servants-turned-singing tchotchkes are under an enchantment. It’ll take the chance arrival of a pretty, intelligent gal like Belle (Emma Watson) to change things.

Fans of the animated Disney original will recognize the same plot, the same characters -- including Lumière (voiced by Ewan McGregor); Cogsworth (Ian McKellen); and the teapot-and-teacup, mother-and-child duo of Mrs. Potts (Emma Thompson) and Chip (Nathan Mack) -- much of the same dialogue, and all of the same songs (plus a few extras). This Beauty and the Beast is no Cocteau twin, no exercise in minimalist poetry. It goes for baroque at every turn, packing in all the sentimental thrills of a heart-zinging Broadway spectacle, and the changes are few but significant. Casting Emma Watson as Belle, who was drawn as an almond-eyed Euro-stunner à la Hedy Lamarr in the 1991 animated film, gives the character a low-wattage, fresh-scrubbed country prettiness that’s believably ignored by her small-town neighbors as she trills about the latest book she’s reading. (Watson has a sweet, bell-like singing voice, too -- who knew?) When he-man hunter Gaston (Luke Evans) repulses her by declaring his matrimonial intentions, she runs off to the hilltop like Maria Von Trapp to declare, “I want adventure in the great wide somewhere” -- and with such sincerity we hope that means a scholarship to the Sorbonne instead of a Disney princess’ usual romantic fate.

The sweeping hope of that moment is more soaring than the identical passage in the original animation because of the difference between cartoons and live action. Cartoon characters can stretch and bounce in all kinds of forgiving ways, but when the Beast beans Belle in the face with a snowball in this version, it’s just mean. Stripping away animation’s layer of fantasy also lays bare how unenviable Belle’s station is, since every man in the movie wants something from her, whether it’s the lifting of a curse or the lifting of her skirts. On the flip side, no drawing could ever be as good as the real Josh Gad and his burlesque and witty portrayal of Gaston’s flunkey LeFou, who is obviously besotted with Gaston in the way Smithers always was with Mr. Burns.

The hubbub over the movie’s truly brief “gay moments,” a total of about two and half seconds of screen time that has inspired Russia to release Beauty and the Beast with an adults-only rating and briefly prompted a drive-in theater in Henagar, AL, to decline a screening, bears examination. Arguably, it’s an appropriate tribute to the late lyricist Howard Ashman (who also wrote songs for The Little Mermaid and Aladdin, and who died of AIDS four days after the animated Beauty and the Beast’s first screening). His bright and brilliant songs (co-written with Alan Menken) make up so much of the heart and soul of this film, so is it that much skin off anyone’s back to have the mildest suggestion of a happy ending for gay characters in a story that’s so lathered up about heterosexual courtship? Don’t the LGBTQ-ties in the peanut gallery get to be princess for a day, too?

But that justness doesn’t entirely wash out the tang of the movie’s self-congratulatory whiff of “aristocrats know best.” The literate Belle doesn’t inspire her local townsfolk to read and see what they’re missing, or convert the Beast’s impressive private library into a public one; she escapes into a gilded fantasy with a prince and his “expensive education,” presumably writing off the ignorant riffraff and their incurable case of yokelitis. The “gay moments” are less celebratory than didactic, and when evangelist Franklin Graham complains that Disney is “trying to push the LGBT agenda into the hearts and minds of your children,” it’s hard to disagree. (Maybe a better way to honor Ashman would have been to make sure his incomparable lyrics weren’t trampled over in the multitrack din of IMAX sound.)

But that’s the smallest grit in the oyster in a film that celebrates a coercively liberal, escape-into-elitism narrative that’s a dirty thumb in the eye to anyone not at the Tesla-driving, kale-eating top. See, Podunk, see, Topeka, see, who-ever-heard-of-you Henagar, AL: All you have to do is believe what we believe, whether it’s in this fantasy 17th century France that is also somehow conspicuously multicultural, or in Mousetown, CA, and you too could live among all this damask and fleur-de-lis, instead of in your crowded double-wide crammed with Walmart junk that, if it could move and talk, would only say “Them’s good eatin’” and “Git-R-Done.” The whole movie’s a gilt trip.