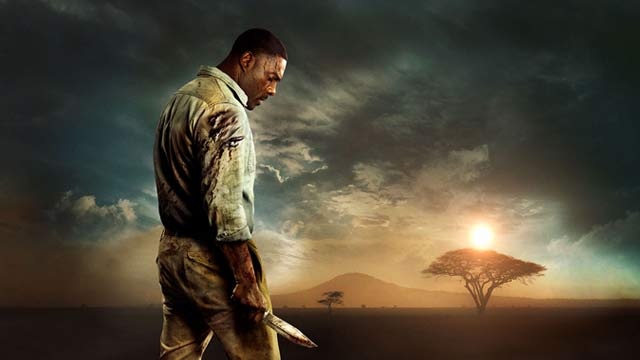 Beast is directed by Baltasar Kormákur (Everest) and comes from the writing team of Ryan Engle and Jaime Primak Sullivan (Breaking In). While some of the action goes beyond the realm of belief, the film is still a thrill ride that keeps the audience on the edge of their seats once the action gets going.

After the tragic death of his ex-wife from cancer, Dr. Nate Samuels (Idris Elba) takes his two estranged daughters, Meredith (Iyana Halley) and Norah (Leah Jeffries), to South Africa, where their parents met. Upon arriving, they meet Nate’s old friend Martin Battles (Sharlto Copley), who takes them on a safari tour. Unfortunately, the tour is cut short when a village is found massacred. Before long, the four find themselves in a life-or-death battle with the culprit – an unusually intelligent and powerful lion determined to avenge the death of its pride at the hand of poachers.

The movie starts slow, with the intent to establish the characters, but it doesn’t do a very good job and seems rushed. Some moments would have been better if the screenwriters had spent more time developing some background. Despite this, Engle and Sullivan know how to entertain once they get the audience to the action and the terrifying, vicious, and incredibly real-looking lion. The tension remains high throughout the film. There is always the feeling of anxiety over what is waiting around the next corner. Kormákur’s direction adds to this, ensuring viewers can feel the characters’ unease. All four leads also do an exceptional job at this. The two young actresses do very well at expressing youthful exuberance in the case of Jeffries and teenage indifference in the case of Halley – and abject terror from both once the lion is stalking them. Veteran actors Elba and Copley balance their performances against the lion instead of over it.

The cinematography is breathtaking in the views of Africa and harrowing whenever the adversarial lion is present. The camera whips about a bit, but this only adds to the confusion in a positive way and, at times, makes viewers feel like they are caught right in the middle of the battle. Adding to the brilliant imagery is some of the best CGI ever rendered. No actual lions were used in the filming, but the nearly seamless animations make this difficult to distinguish. The viewer can almost reach out and feel the lion’s mane, see the wild expression in its eyes, and smell the blood on its breath. As long as the audience can separate themselves from the unlikely events that need a little more clarity in the story, the focus remains where it should be when the beast is present.

Beast is an entertaining and sometimes nerve-wracking film with a decent story and high-quality action. Even with its minor scripting flaws, the writers, director, and actors can look at the finished project with pride.