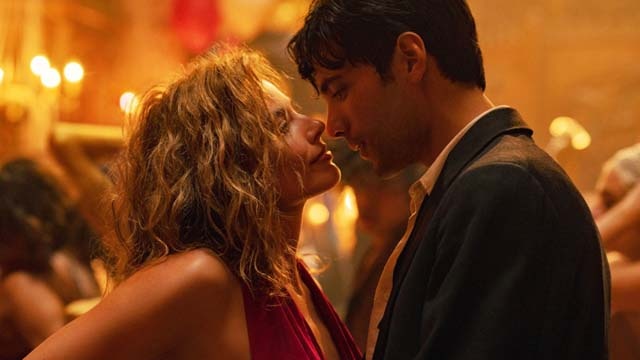 Writer/Director Damien Chazelle (La La Land) takes on Hollywood again in Babylon. This time, he interweaves the lives of rising stars, falling stars, and hangers-on in a tale that brilliantly crosses the time barrier by crossing the sound barrier.

Nellie LaRoy (Margot Robbie) is confident she is a star; so, she crashes the insanely hedonistic party whose centerpiece is Jack Conrad (Brad Pitt). Almost derailed, she is helped by Manny Torres (Diego Calva), who also wants to leave a mark that no one will ever erase. Random circumstances allow them both to achieve their dreams. In doing so, their actions cause others to rise and fall around them, most notably the seductive Lady Fay Zhu (Li Jun Li) and the talented jazz musician Sidney Palmer (Jovan Adepo). But Nellie’s ties to excess and Manny’s ties to her soon change everything for both of them, with an extra nudge from the arrival of talking motion pictures.

Chazelle creates a world that portrays what everyone expects the birth of Hollywood to be like and does a fantastic job of bringing many whispered rumors of the early days of Tinseltown to life. The wild parties are accompanied by frenzied camerawork where audiences only get glimpses of what is happening, much like what is assumed the players would remember on the mornings after. The pseudo-romance story that ties it all together is a brilliant Frankenstein made partly of My Fair Lady, partly of Romeo and Juliet, and partly of Forrest Gump. It plays exactly as it sounds it would, to amazing effect. Along the way, viewers get a raw glimpse of how Hollywood had to come to terms with sound and lighting through the eyes of those in the background. It also addresses the two-sided coins of race and sexuality and having to cater to those who cared more about it than anyone at any studio. Stunning portrayals by Li and Adepo accomplish this well. Pitt continues to do his best work yet and seems to have decided he’ll only take on films where he can have fun with the roles. It suits him well. Calva’s calm intensity plays well throughout the film, making the last half hour all the more startling. This plays well against Robbie’s fine manic performance, as they do a law-and-chaos dance through showbiz. Jean Smart, who plays a tabloid writer that drifts in and out of the tale, gives the performance of her lifetime in a brief monologue that ties everything up into a nice bow, even though it is quite long by film’s end.

The cinematography deserves a second nod because amazing things are accomplished in almost every aspect. Framing, lighting, angles, motion, colored lenses, and more are all meticulously used to present everything, from romantic to horrific moments throughout the movie. All of this is tied together with a subtle yet frenzied soundtrack. The combination of these keeps the audience awestruck for over three hours.

Babylon may not be a perfect film. But it is a near-perfect representation of all that is real and imagined about giving up everything for a life in Hollywood. It also provides an excellent perspective to everyone who ever made that sacrifice – both the blessed and the cursed.