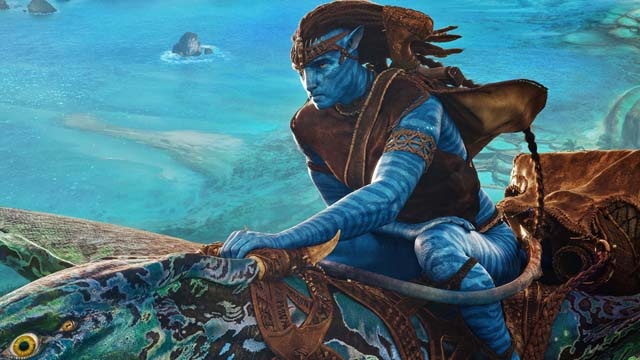 James Cameron returns to the world of Pandora in Avatar: The Way of Water. With him, he brings four additional writers, who do a fine job when they aren't getting in each other’s way, creating an amazing overall experience.

The Sully family is living an idyllic life with the Na'vi people in the forests of Pandora. Jake (Sam Worthington) and Neytiri (Zoe Saldaña) have three children of their own, plus Kiri (Sigourney Weaver), the adopted miracle daughter of Grace Augustine. There's also Spider (Jack Champion), a human child close to the Sully children. But this paradise is broken when a fleet of ships returns, intent on picking up where they left off, with the added purpose of exacting revenge on Jake for killing their troops and expelling them from their original mining mission. Jake steps down from leadership to save his people and moves his family to dwell with the Na'vi of the sea. But the humans are so determined to kill the rebel leader that they pursue him, putting Jake, his family, and the lives of all the Na'vi in danger.

Cameron, after numerous delays, has delivered an absolute visual feast. Working with four other writers, however, does affect the script. There are periods in the three-hour-plus film that are incredibly beautiful but drag on, and occasionally character progression doubles back on itself. This makes the audience wonder what the motivation is behind some events, and this is never explained. It seems almost like the writers occasionally lost track of the "how" for the end result and just made sure they hit the "where" of it. In some cases, the where doesn't matter to the story; so, it is pointless and settles in the brain as a minor distraction. Once the film moves past this development and returns to the meat of the story, it never lets go of the viewer. This thrill ride is driven by the performances of the actors, most notably Weaver – who previously starred as Grace but is now voicing that character's daughter, Kiri.

It wouldn't be sincere to say the CGI is the film's star, but it should definitely have high billing. Only two scenes don't have any, and they're minor. The rest of the time, the audience is treated to a festival of light and beauty. There are very few scenes that do not seem organic, and they aren't significant enough to interrupt the suspension of disbelief. The characters, sets, and scenery are almost as real as the theater seats. The water and underwater scenes are particularly stunning and a huge advancement in the industry.

Taking all elements together, Avatar: The Way of Water is a marvelous film. The sheer magnitude of the production easily overcomes its minor flaws. This level of detailed CGI should pave the way for the foreseeable future.