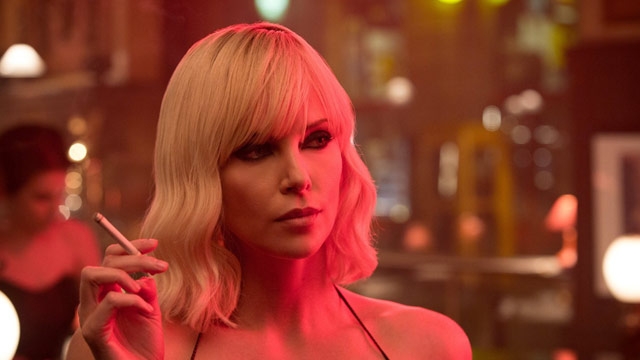 Charlize Theron stars as MI6 agent Lorraine Broughton in director David Leitch’s high-velocity spy thriller, which is set in 1989 Berlin during the waning days of the Cold War. When we first meet Broughton, she’s badly bruised from head to toe and on her way to be debriefed by her humorless boss (Toby Jones) and a stuffy CIA chief (John Goodman). They want to know how her most recent mission, the attempted retrieval of a missing, ultra-top-secret list containing the names of every Western agent working on both sides of the Berlin Wall, went horribly awry. As she makes her way to the meeting -- stylishly dressed in a sleek white coat, black sunglasses, and a killer blonde wig -- David Bowie’s “Cat People (Putting Out Fire)” blares on the ’80s-dominated soundtrack. It’s a great song, but savvy filmgoers will instantly recall that it was put to superior use by Quentin Tarantino in Inglourious Basterds; it’s the first inkling that everything we’re about to see is a subpar retread of better movies. That said, those better movies didn’t have Theron, and her steely, sexy turn as a badass spy who kicks serious butt makes Atomic Blonde a cool way to kill a sweltering summer afternoon.

Based on the graphic novel The Coldest City, a pulpy espionage thriller by Antony Johnston and Sam Hart, Atomic Blonde is part Bond, part Jason Bourne, and a whole lot of John Wick. That last part isn’t surprising since Leitch, a veteran stuntman-turned-filmmaker, co-directed that brutal Keanu Reeves actioner. The body count isn’t as high as Wick’s, but there’s enough bloody mayhem occurring every few minutes to make viewers forgive the muddled, generic plot, bland supporting characters, and scant suspense. The action centerpiece is a nearly ten-minute fight sequence filmed in what appears to be one take: It begins with Broughton battling two thugs on an apartment stairwell, and the vicious melee then continues down the stairs, into a couple of rooms, and eventually out into the streets where she and a severely wounded ally steal a car and try to hold off more baddies who are blasting away at them from another vehicle. It’s an amazing piece of filmmaking that packs the visceral, gut-punch feeling of the best Bourne brawls.

James McAvoy co-stars as David Percival, an embedded Berlin station chief who aids Broughton. She was told by her superior not to trust anyone during this mission, and that distrust extends to Percival, who may or may not be a treacherous double agent known as Satchel. Percival is a bit of a sleaze, and McAvoy embraces the role with giddy relish, providing what little humor the movie offers. Sadly, Sofia Boutella, playing a rookie French agent, is underused and unnecessary. Her character feels like she was shoehorned into the plot to provide the film with a gratuitous lesbian sex scene with Theron -- she deserves better.

Atomic Blonde doesn’t possess the sophistication of the best Bond movies or the intensity and suspense of the Bourne films, although it shamelessly pilfers from both. It’s strictly a low-rent affair dressed up in neon-bright high style. But it does have Charlize Theron, whose high-level spy is even tougher than the truck-driving Furiosa she played in Mad Max: Fury Road. Rarely has a movie featured as many extreme close-ups of a star as the Oscar winner gets here, and Theron makes the most of every one of them, to the point that she renders everything else onscreen irrelevant. To say you can’t take your eyes off her is an understatement.