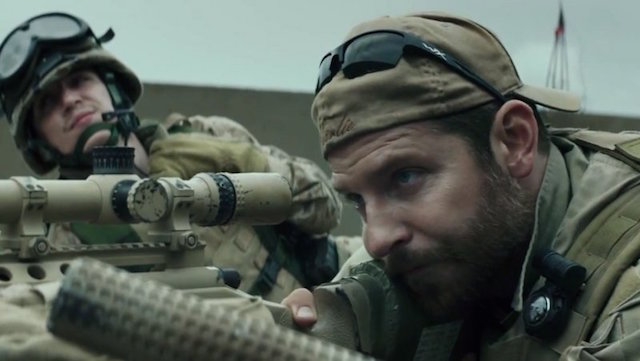 Looking back at the legacy of war films in American cinema, it’s easy to feel as though the definitive story of U.S. involvement in the Middle East remains untold. Yes, David O. Russell’s Three Kings managed to expose the absurdity and greed surrounding the Persian Gulf War, and Kathryn Bigelow’s The Hurt Locker explored the psychological toll that continued service can have on a soldier. But 13 years after 9/11, our inability to grasp the larger sociopolitical ramifications of these ongoing conflicts has made it difficult to paint a picture of their ultimate impact.

In American Sniper, director Clint Eastwood offers an intimate portrait of a sharpshooting patriot who discovers that his personal demons are greater than he suspected. As a character study, the film works more often than not, thanks in large part to Bradley Cooper’s tightly wound performance as real-life sniper Chris Kyle. Still, with the better portion of American Sniper’s running time devoted to Kyle’s combat experiences rather than his personal struggles to overcome PTSD and help his fellow soldiers after he returns home, the movie feels like something of a missed opportunity—despite the fact that Eastwood largely manages to sidestep the jingoism of something like Lone Survivor, a film that seemed content to function as a simple action flick instead of using its situation as a launching point to examine more pressing issues.

As the story opens, we meet carefree brothers Chris (Cooper) and Jeff (Keir O’Donnell) as they work the Texas rodeo circuit. They’re cowboys through and through, and despite being notably older than the usual enlistee, Chris pays a visit to his local recruitment office and decides to become a Navy SEAL. Later, at the firing range, he draws on his hunting lessons with his stern father to become an expert marksman. A booze-fueled barroom chat with pretty brunette Taya (Sienna Miller) soon leads to wedding bells, and following the terrorist attacks of 9/11, Kyle is deployed to Iraq for his first tour of duty. There, his reputation as a sniper who never misses makes him a legend among his fellow troops, and earns him the moniker “The Devil of Ramadi” from his enemies.

With a substantial bounty on his head, Kyle makes it his personal mission to take out a sadistic Iraqi soldier known as “The Butcher,” as well as an elusive enemy marksman with a skill to rival his own. The closer he gets to achieving his goals during repeat tours of duty, however, the more fellow soldiers he sees die, and the further he drifts from Taya and their two children back home. It all leads up to a tense rooftop gunfight in a raging sandstorm—one that convinces the sniper once and for all to make his family his top priority. Unfortunately, all is not well as Kyle struggles to make the transition back to civilian life, but he discovers that helping his fellow veterans is an effective way to do good and make peace with his wartime experiences.

Anyone who’s familiar with Eastwood’s work knows that he’s an unapologetically earnest storyteller with a fondness for war movies, so his decision to tell the tale of “the most lethal sniper in U.S. history” feels like a logical progression after his WWII features Flags of Our Fathers and Letters From Iwo Jima, and a trio of biographical dramas that include Invictus, J. Edgar, and Jersey Boys. Unfortunately, following the success of Gran Torino, it seems as though Eastwood has gotten so caught up in churning out films that he’s forgotten how to engage an audience. Despite being effective on a purely visceral level, American Sniper focuses too much on combat sequences and too little on their repercussions to be an effective meditation on the personal toll of war. Also detracting from the movie’s intimacy is the fact that it’s often difficult to keep track of Chris’ war buddies, and Jeff Kyle vanishes from the story entirely after a disturbing encounter with his brother that raises more questions than it answers.

As a result, American Sniper never achieves greatness. It chooses to focus, somewhat less effectively, on the themes previously explored in Bigelow’s aforementioned Oscar triumph, while giving two-time nominee Cooper another shot at a little gold statue. Physically imposing and emotionally distant as the film’s unapologetically patriotic subject, Cooper does his best to provide some emotional gravity to Jason Hall’s flawed screenplay. Perhaps if the writing talent were there to back Cooper and Eastwood up, American Sniper could have been the movie that brought the toll of the War on Terror home. Instead, it’s simply a harrowing reminder that, for many soldiers, the struggle still continues long after they’ve left the battlefield.