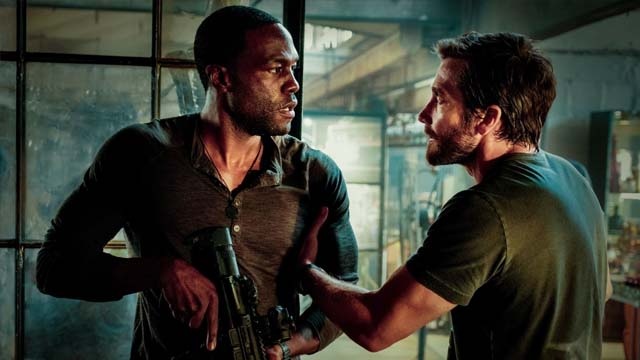 Ambulance is based on Lauritis Munch-Petersen’s 2005 Danish thriller, Ambulancen, and is written and directed by Michael Bay. The full story takes place in one day and, as typical of a Bay film, is jam-packed with overproduced, unapologetic action. It begins with Will Sharp and his sick wife who needs an astronomically priced surgery that they can’t afford. Unbeknownst to her, he contacts his adoptive criminal brother Danny, and together they devise a plan to rob a bank in Los Angeles. They team up with a gang of Danny’s friends, the bank robbery goes wrong, a hostage is taken, and Will and Danny hijack an ambulance driven by EMT Cam, played by Eiza Gonzalez (Baby Driver).

Gonzalez is great as Cam, who is so talented she can perform surgery in a moving ambulance while getting instructions over a video call. Her performance is refreshing as one of Michael Bay’s few strong female action hero leads, and probably the most notable one since Scarlett Johansson in The Island (2005). Oscar-nominated Jake Gyllenhaal (Brokeback Mountain) plays Danny as a maniacal lunatic bordering on Joker status and Yahya Abdul-Mateen II (Candyman), gives a sincere portrayal of Will, though their performances could combine to make viewers want to see the pair together in a buddy comedy. Being chased by the police while listening to Christopher Cross’s “Sailing” is a recipe for audience laughter. Garret Dillahunt joins the cast as Captain Munroe, who makes some extremely questionable career and fashion choices.

It’s an action-packed movie and a comical one at that, thanks in part to a funny script with unexpected laughs written by Chris Fedak. The action is relentless and loud with all of the massive drone shots and explosions you would expect from Bay. It’s stupid fun and the kind of movie that gives an audience the feeling of being on a Universal Studios Tram ride. One just has to go with each preposterous moment as the spectator is forced to sit back and watch the action.

No Michael Bay movie would be complete without expected product placement. It isn’t too disappointing as Gyllenhaal’s character drones on about his Keurig and pays homage to Los Angeles like Munroe’s ridiculous head-to-toe USC clothing. The movie is way too long, clocking in at 136 minutes and when it begins, it never takes a moment to breathe; so, by the end, the audience is as exhausted as the characters. But sometimes it’s refreshing just to have an action-packed adventure on the big screen movie that is just good fun. So, for those who enjoy a movie that makes the most of its $40 million budget, Jake Gyllenhaal, and a silly laugh or two, Ambulance might be a worthy next guilty pleasure.