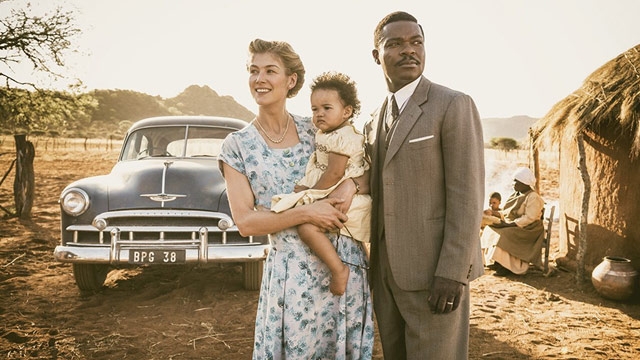 Ruth Williams (Rosamund Pike), an English clerk, and Seretse Khama (David Oyelowo), an Oxford law student and the king-in-waiting of Bechuanaland (now Botswana), meet at a jazzy social club in 1947 London, and are instantly smitten with one another in director Amma Asante’s thoughtful true-life drama. Little do they realize that their chance encounter will soon lead to great political upheaval in Britain and his tiny South African nation. Why? She’s white, he’s black, and their impending marriage will be inconvenient (to say the least) for both countries. But, as Emily Dickinson wrote, “the heart wants what it wants,” so the two plunge headlong into a life together, hoping that everyone else will respect their love and allow them to live together in peace. But, of course, that’s not what happens.

“We’ve misjudged this, haven’t we?” Ruth asks her husband soon after they arrive in Bechuanaland and face strong opposition from Seretse’s uncle (Vusi Kunene), who has been serving as regent while his nephew studied abroad. He advises Seretse to either divorce Ruth or abdicate, but the young man refuses. In an impassioned speech to his fellow tribesmen, he declares, “I am ready to serve you because I love my people. I love this land. But I love my wife!” And his clear devotion to both his people and his spouse wins their support. Unfortunately, their approval isn’t enough; his interracial marriage could lead to the “downfall of the British Empire in Africa,” according to English diplomat Alistair Canning (a snarky Jack Davenport). How? Bechuanaland is a British protectorate, while its neighboring country South Africa is implementing apartheid. If Britain supports the Khamas’ progressive union, it could anger the South African government, which might then cut off access to the country’s rich resources, including uranium, gold, and diamonds -- World War II was costly, and the U.K. can ill afford to lose this lucrative African connection. To that end, the British government exile Seretse and refuse to let him return to his own country. But Seretse, who is also a skilled boxer, won’t go down without a fight.

Asante and screenwriter Guy Hibbert (Eye in the Sky), the latter adapting Susan Williams’ book Colour Bar, do a good job of streamlining the narrative and playing up the romance, but the movie still feels oversimplified. What attracts Seretse and Ruth to one another is never fully explored, and Ruth’s life in Bechuanaland, where she eventually becomes a beloved first lady, is given scant attention. Pike injects great warmth into her performance, but the part is underwritten and does a disservice to the great woman she is playing. On the other hand, the role of Seretse is fully formed, and Oyelowo is nothing short of magnificent. His Seretse is a man equally devoted to his country and to his wife, and he’s determined to bring freedom to his oppressed people. “No man is free who is not master of himself,” he declares. It’s easy to see why Bechuanaland’s citizens eagerly follow him, placing their destiny in his hands.

A United Kingdom’s themes of loving who you want and becoming the master of one’s own destiny will, undoubtedly, resonant with audiences worldwide. It’s inspirational, romantic, and uplifting. Yet, for all of its accomplishments, it’s also frustrating. It’s a good, solid movie, but with a more penetrating script and more dynamic direction it could have been great -- just like the heroic couple it seeks to honor.