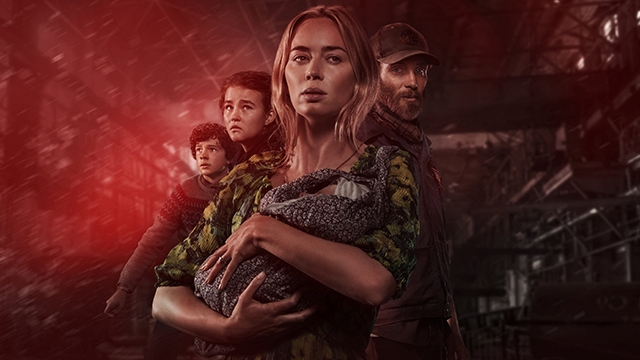 Picking up right where the original film ended, A Quiet Place Part II delivers in a way that few sequels do. Director John Krasinski masterfully navigates through the silent wasteland, using all our relevant senses to tell a gripping story. As Krasinski weaves together simultaneous plot lines, the audience is treated to excruciatingly tense and thrilling scenes. This top-tier direction, paired together with wonderful acting, really brings this story to life. The cast, led by Emily Blunt, are doubtlessly acting in the moment, and drive much of the film’s realistic feel.

It is Day 437, and the Abbott family continue their journey through the new and muffled New England terrain. Creatures still roam the world, only reacting to sound, and feed upon everything they hear. Evelyn (Blunt) and her children, Regan (Millicent Simmonds) and Marcus (Noah Jupe) make way into uncharted territory, looking for help from a distant bonfire they see the night prior. As they venture towards the fire, they run into an old friend, Emmett (Cillian Murphy). Filed with grief and worry, Emmett wants to stay alone, but the ensuing events put everyone on their own path.

A Quiet Place Part II, along with its predecessor, are largely unique films. By harnessing the silence, and telling the story with masterful camera work, Krasinski constantly keeps the audience engaged. Slow pans across wide landscapes give the audience a feel for what has happened in this world. An abandoned train station or an empty neighborhood shed some light on the pure terror these people must have felt when they first discovered the creatures. There is truly never a dull moment in this film; scenes are stitched together so perfectly that the movie seems to end right after it starts.

Of course, much of this would not have worked if it weren’t for the brilliant cast, who seem so in tune to what they are doing on screen that this other-worldly Sci-Fi scenario feels eerily authentic. Blunt, Murphy, Simmonds and Jupe all play a huge role in the film, and they all deliver in spades. Simmonds, in particular, takes on more of a role here, filling in for Krasinski’s heroic character of the original film. She is seemingly capable of conveying any emotion through a simple look, and her presence in A Quiet Place Part II truly makes it a memorable film.

There are so many components to this film that work flawlessly. All of the moving parts are melded together with a consistent, engaging style that breeds a must-see cinematic experience. Theater goers looking for an edge-of-your-seat thriller will not be disappointed. Krasinski’s sequel sports an action-packed 97-minute run time, full of drama, tension, and horror. As viewers gear up to enter the New England wasteland, they should be prepared to experience genuine scares and triumphs.