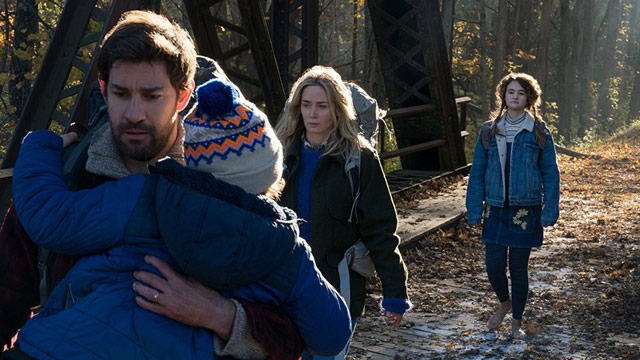 Slowly and carefully, a family of five walks through an abandoned town, making sure to only step on the sandy path. Their middle child is sick, and they are searching for some medicine. Any noise could be their last. The youngest child picks up shiny new electronic rocket and puts it in his coat. The medicine is found, the family starts to walk back, and then, the toy goes off.

Tension drives John Krasinski’s new thriller, A Quiet Place, and it does not let up for the entire film. The opening sequence puts the audience on the edge of their seats and establishes the tone for the duration of the 90-minute runtime. A unique look at the world without noise, A Quiet Place is able to portray a realistic view of an otherwise unrealistic dystopian future. There is never really a good time to relax and breathe, and this is done without constant anticipation of jump scares. The setting is quiet, peaceful, yet terrifying.

Set in the not-so-distant future, the world has been inhabited by terrifying creatures that depend on their incredible sense of hearing. One loud slip-up could mean your life, and each day is a gift for the survivors. A Quiet Place focuses on the daily life of the Abbott family, supported by Lee (John Krasinski) and Evelyn (Emily Blunt). Life is not easy when you cannot make a sound, especially while caring for children. The Abbott family adapted well to their quiet life, reimagining everything from cooking dinner to walking around outside. Lee spends his days hunting and foraging for food, while trying to teach his young son how to live in this new age and his nights are spent meticulously developing hearing aids for his deaf daughter (Millicent Simmonds). Evelyn sticks close to home, taking care of the house and preparing for their upcoming newborn child. Each day becomes routine, until an inevitable mistake triggers a deadly chain of events.

The direction in A Quiet Place is nearly flawless, as the camera and setting are the only way to tell the story. Krasinski places small tidbits of information throughout the film, giving the audience just enough information to paint a picture of what happened. Newspaper clippings and handwritten notes are an integral part of the story telling, almost as important as the few dialog scenes in the film. Characters are developed through facial expressions, sign language and pure camera work. Transitioning from person to person is done with perfect pacing, and really amps up the stress-filled moments in this film. Pair this with impeccable sound design, and Krasinski turns in the best work of his brief directorial career.

Acting plays second fiddle in the film but is memorable nonetheless. There isn’t a bad performance among the cast, and Blunt truly stands out in her hushed scenes. Playing a strong mother, one who will risk and sacrifice anything for her family, she is able to steal the show and win over the audience. The cast was able to show that it takes an entire family working together to get by, all while still being normal people. Living in silence doesn’t change the fact that a young-teen will be moody and confused, or a young child will be scared to venture off in the woods to gather food.

Survival is the only thing that matters in this silent thriller, and the film delivers on all fronts. In all honesty, A Quiet Place is hard to talk about, because it is so unique to the genre. The film has an odd way of making you afraid of sound more than anything, conveying the creatures as an extension of that sound. Every once in a while, there is a fresh and unique entry into the thriller/horror genre, and it sets a new standard. A Quiet Place took a big risk, but one that paid off, as this film will be one of the 2018’s best thrillers.