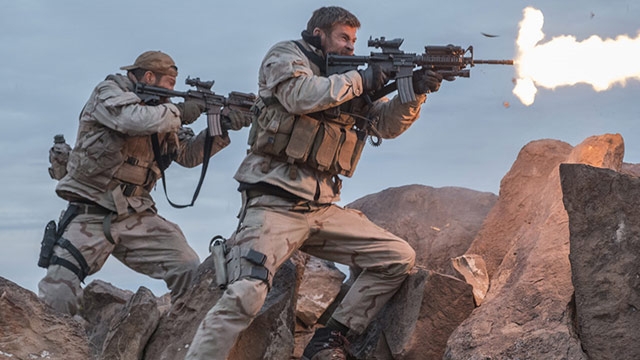 Last summer’s Dunkirk set a new benchmark for war films, portraying the British evacuation of Dunkirk in a way that conveyed the sense of mortal danger involved in combat, as well as the emotional tension that occurs when soldiers (and civilians) find themselves straddling the razor-thin line between life and death. It managed to convey both these feelings and a strong sense of British patriotism, even though it tended to give the vivid battle scenes precedence over individual character development. Nevertheless, this technique worked surprisingly well and served to distinguish Dunkirk from the many character-driven war films, such as Saving Private Ryan and American Sniper, that remain the most popular examples of the genre.

Despite the differences between the European theatre of World War II and the United States’ 2001 invasion of Afghanistan, Dunkirk is likely to be on many moviegoers’ minds when they see 12 Strong. However, the involvement of producer Jerry Bruckheimer (whose Pearl Harbor was released shortly before the invasion that 12 Strong portrays) ensures that they will see a much more conventional war film. Bruckheimer specializes in blockbuster action flicks, and the combat scenes in 12 Strong play more like explosive free-for-alls than realistic representations of war. While the movie is meant to commemorate the heroic efforts of the 12-man Army task force that overwhelmed the Taliban stronghold of Mazar-i-Sharif a mere three weeks after the 9/11 attacks, many of the combat scenes end up emphasizing the terrible destructive powers of American air strikes rather than the ground-level efforts of the so-called “Horse Soldiers.”

In its non-combat scenes, 12 Strong is a much more character-driven film than Dunkirk, which is probably appropriate given the fact that it follows a group of twelve soldiers rather than the entirety of the British forces at Dunkirk. But while its enthusiastic attempt at portraying the camaraderie among a tight-knit group of soldiers fighting against extreme odds might be fitting in theory, it often fails to be convincing -- especially with Chris Hemsworth playing the task force’s leader, Captain Mitch Nelson. His well-groomed appearance and mischievous demeanor do nothing to suggest that his character is a competent military leader, an unfortunate obstacle which persists until the final battle sequence. Even less convincing is the friendship between Nelson and the Uzbek warlord General Dostum (Navid Negahban), with whom the American task force joins forces in their fight against the Taliban. As Nelson, Hemsworth foolishly blusters his way through almost every one of his encounters with Dostum -- making the frequent shifts in the general’s attitude toward him seem arbitrary and mostly self-motivated.

One of 12 Strong’s redeeming facets is the presence of Michael Shannon as Nelson’s second-in-command, Hal Spencer. As the film progresses, it’s hard to shake off the feeling that Shannon, with his powerful presence and hard-edged stare, would have been more convincing in the role of Captain Nelson, even if this would have meant sacrificing the everyman appeal of Hemsworth (which would have likely made a crucial difference in the movie’s box-office performance). Still, like Dunkirk, 12 Strong is primarily an ode to patriotism and the soldiers who fought bravely for their country -- despite its questionable casting choices and overly bombastic combat scenes. It may not be a particularly memorable war film on its own merits, but its commemoration of an extraordinary and little-known American military victory will likely be enough to satisfy veterans and war-movie fans alike.