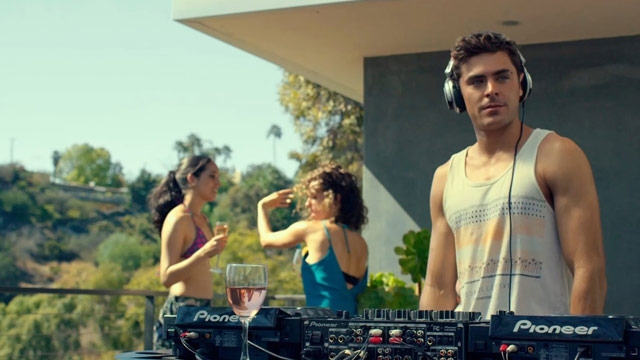 In the San Fernando Valley, home of strip-mall sushi and dusty, drained backyard pools, four bros — quiet, pretty-eyed Cole (Zac Efron), hotheaded Mason (Jonny Weston), aspiring actor and low-level drug dealer Ollie (Shiloh Fernandez), and tagalong Squirrel (Alex Shaffer) — are plotting their escape over the Hollywood Hills to the real party in L.A. proper. Cole is a DJ with enough skill to book small, local nightclubs for a minimal door take and free drinks for his friends, but he has bigger ambitions. (As Mason puts it: “99 percent of people are looking for a party. One percent are the party.”) When One-Percenter Cole isn’t working as a roofer for Mason’s dad, he’s hunched over his laptop, laying down beats in search of the one killer track that will lead to booking gigs on the A-list party circuit: beach bashes in Ibiza, all-night raves in Tokyo, and “Dubai… which is in the Middle East.”

That last bit of clarifying information comes from James (Wes Bentley), a well-established DJ coasting on his laurels. He has everything Cole wants, including a studio full of vintage synthesizers, and a busty girlfriend/assistant/enabler named Sophie (Emily Ratajkowski) who spurned Cole’s advances at a club the night before, but sure pouts at him a lot. After sharing a joint with Cole in the alley behind a nightclub, James agrees to listen to some of his tracks, and he hears potential. He wants to take him under his wing, an offer Cole would accept with less hidden anguish were it not for his burning desire for Sophie.

The plot of We Are Your Friends is a blatant retread of Saturday Night Fever, a cynical move built on the assumption that most millennials haven’t seen the original. See if this sounds familiar: A talented Anointed One, living in a backwater borough to the true Big City, passes the time partying in nightclubs with his boorish pals, until he meets a sophisticated friend who connects him to bigger opportunities. It’s almost shameless in its larceny: the big musical numbers that allow the hero to strut his stuff, the working-class limitations, the senseless tragedy involving one of his friends that serves to galvanize his commitment to his dreams.

Regrettably, the movie’s take on gender relations is just as bad as its predecessor. While the men in We Are Your Friends are hardly examples of nuanced characterization, the objectification of women in this film is egregious even by dude-comedy standards. The female “characters” (even using that term is a stretch) are uniformly depicted as surly mannequins who have evolved solely to transport breasts from one party to another, and every one of them, even Sophie, displays only two emotional states: sneering disdain while sober, and complete pornographic submission after getting blitzed. Even drive-in garbage like Satan’s Cheerleaders (1977) is more enlightened than this Neanderthal mess.

Yet there are a handful of meaty moments here, grafted onto the stolen bones of Saturday Night Fever, and they hint at the story’s potential for greatness. The audience will sit up and pay attention during a sequence in which Cole explains the sly craft of how to get a room jumping: Start with music that’s an enticing 125 beats per minute, and crank the bass lines so people will subconsciously feel the tremors in their hips — then slowly, delicately, as the bolder guests start to groove, stack faster and faster cuts until the whole room is bopping at 128 beats per minute, the heart rate of a runner in joyous form. Cole is an intelligent and charismatic character, and he shines in scenes where he gets to display his talent in front of teeming crowds, or where he and James meet in the latter’s mixing-room basement and dissect his work one track at a time, their dialogue full of passion and a creative intelligence that’s missing from the dim-witted rest of this movie. We Are Your Friends contains about 30 minutes’ worth of an honest and inspired indie drama about a young DJ’s progress as both an artist and a man, but it’s dragged down by the other 66 minutes of the same old dreck.