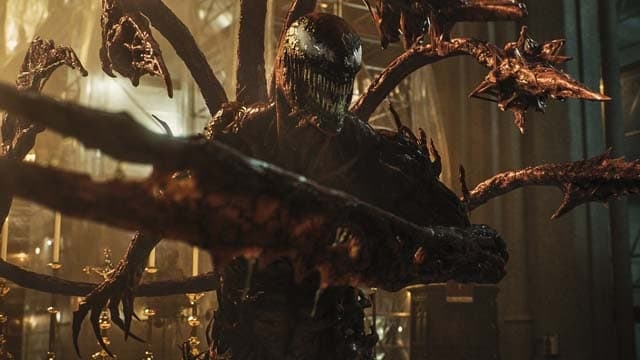 Venom: Let There be Carnage

Tom Hardy is back, this time not only starring but sharing the writing credits with Kelly Marcel for Venom: Let There be Carnage. His love of the character infuses the story with more life than in the first film. Andy Serkis’ competent direction fills out the presentation, making the sequel more appealing to reluctant audiences and a multi-course banquet for those who enjoyed the first film.

Eddie Brock’s (Tom Hardy) life is sliding downhill fast. His fame and fortune from exposing the Life Foundation have run out, and his relationship with Venom is rocky at best. So, when he has the opportunity for an exclusive interview with serial killer Cletus Kasady (Woody Harrelson), he reluctantly agrees. But the first meeting doesn’t go as planned, resulting in Kasady returning to death row. On the day of his execution, he and Eddie meet again. The result is Kasady biting Eddie and taking a symbiote offspring, Carnage, into his own body. To prevent Carnage from going on a killing rampage, Eddie and Venom must put aside their differences and work together to stop Carnage’s destructive goals.

The film is blessed with a slightly better script, a cohesive story, and far more interesting villains. Because of this, Hardy and Marcel’s story is even more elevated. The themes of duality and struggle with inner conflict are clear – as is the result of embracing the darker side of one’s nature. The writers found an organic way to bring Carnage and Shriek into the arc, and together, without staining their original storylines in the Marvel comics.

Serkis is an excellent choice for director, given his experience working on both sides of the lens for CGI and motion capture. He does an exceptional job ensuring the actors are where they need to be for the final imaging to appear seamless. By now, Hardy knows the characters and translates this experience to an entertaining Odd Couple version of Jekyll and Hyde that is hilarious when Brock and Venom are arguing. Harrelson shines as Kasady, channeling Mickey Knox and taking him up several notches. Naomie Harris’ Shriek is both disturbed and disturbing, a perfect match for Kasady.

While the CGI is excellent, again paying homage to original creator Todd McFarlane’s art style, it does include more violence than the first film. Although it has the same rating as Venom, some scenes may be too graphic for younger audiences, even with the overall comic book theme and feel. This is countered with comical scenes, such as when Venom goes clubbing.

Venom: Let There Be Carnage is a better entry than the first film, introducing more interesting antagonists while maintaining the humor inherent in the Eddie/Venom relationship. Thanks to solid writing, superb direction, and entertaining acting, the second film has much more bite than the first – even for audiences poisoned at the thought of a sequel.