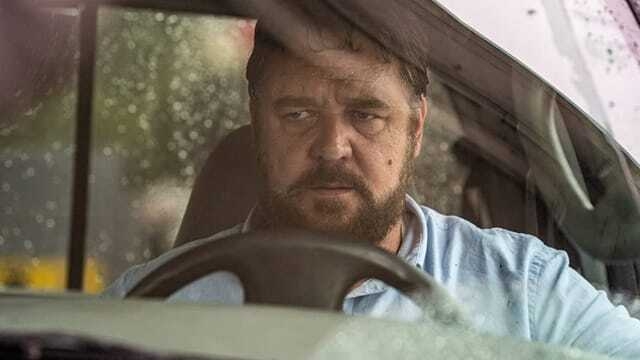 Unhinged is a thriller that asks the question, “what if you ticked off the wrong person while driving your car?” The resounding answer is that you just don’t know what anyone is capable of, or how mentally unsound the average stranger might turn out to be.

Rachel (Caren Pistorius) is running late one morning when she is stuck behind a truck that just sits there when the light turns green. She needs to avoid her son’s third tardy, which would get him suspended, and she has plenty of drama on her plate: a messy divorce, a mother suffering from an age-related disease, and anxiety over losing essential clients from her failing business as a hairdresser.

Blasting her horn, Rachel pulls around the driver in front of her, angrily swerving past. The driver (Russell Crowe) is upset by this, and speeds to catch up, and confront her at the next traffic light. He briefly lectures Rachel on courtesy and demands an apology. However, Rachel is not in an apologizing mood, and thus begins a deep and dark series of events in which the man in the truck decides it’s his duty to teach Rachel a lesson in manners, no matter the consequences.

Director Derrick Borte (American Dreamer, The Joneses) who coincidentally resembles the main character, emulates Michael Bay in his effective use of violence and car chases to gloss over lack of plot and character development. The set pieces and mayhem do grow consistently in lieu of mystery or honest surprises, a characteristic of the genre.

Written by Carl Ellsworth (Disturbia, Red Dawn) there are elements of Tennessee Williams in that there’s always some new dramatic development to make life worse for everyone in the film. It opens with the drivers of both vehicles having incredibly bad days that are about to get much worse. Unfortunately, every beat in the movie is woefully foreshadowed, which is the opposite of a thriller.

The acting is fine, and the sequence of events makes sense; however, there is something so inane about the inciting incident at the traffic stop which resoundingly seems scripted, and yet still not worthy of a feature film. The main characters are hard to relate to in a world where only their problems matter, while the smaller roles offer insight and kindness. That said, the production value is consistently high, and there’s a fun element to a character with nothing to lose.

Unhinged is less of a thriller and more of a misfire horror about a truly deranged human, who does awful things because he gets honked at by an almost equally unlikeable woman. That gaping plot hole is present throughout, and no amount of backstory can remedy the low-concept device that doesn’t pan out. It could have made a good horror comedy if it pushed the edge more and took itself less seriously. On the flipside, this is also a great morality tale for drivers to be a little more kind in their cars and to take responsibility for their actions