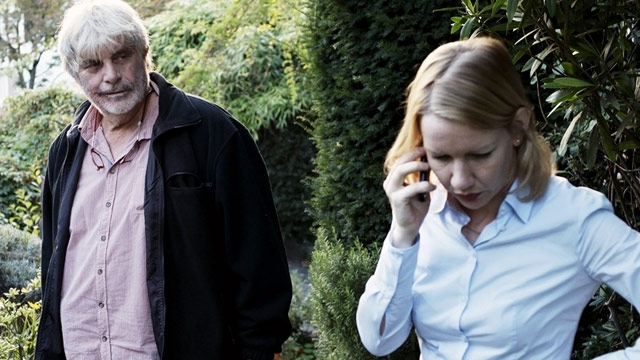 Whoever coined the sneering remark, “He’s about as spontaneous as a German jazz band,” never met Winfried (Peter Simonischek). He’s a shambling sheepdog of a man, with a mop of yellowing gray hair and two days’ worth of hoary stubble at all times. But don’t let the shaggy appearance fool you: He’s a compulsive prankster who cannot stop himself, and why should he, when the world is ripe with plum opportunities for jokes? Do other people not dress up as an imaginary “brother” to greet the mailman? And why would they simply sign for a package, when there’s an opportunity to hint that it might contain a bomb? His adult daughter Ines (Sandra Hüller) expects these shenanigans but doesn’t love them. She and Winfried are not quite estranged, but she lives in Bucharest, working long hours in order to climb the corporate ladder. It isn’t hard to guess why when her father shows up at a family gathering wearing skull makeup and false teeth.

Winfried still hungers to know his daughter better, and so he tags along when she goes back to her apartment in Romania over her birthday weekend. It isn’t a great visit: She’s overextended as she woos clients and pieces together a vital presentation for Monday, and he buys her a cheese grater as a gift. By the time she waves him off in a taxi, she’s in tears. But, much to her horror, there’s another guest at every chic event she attends when she returns to her familiar world of dinner meetings and networking parties -- a shambling sheepdog of a man with false teeth and a sat-upon brown wig, who introduces himself as “Toni Erdmann,” human-resources consultant, German ambassador, and lover of cheese graters.

Yes, this is a “trickster shakes up a stick-in-the-mud” movie, a Teutonic Ferris Büeller whose antics clock in at two hours and 42 minutes. It represents a triumph for writer/director Maren Ade that there isn’t a single dragging moment in this droll and brilliant character study, where the laughs, gasps of horror, and tears of relief sneak up on you with the jumping zzzt! of a joy buzzer -- appropriate, since Winfried knows he has to buzz some joy back into his mirthless daughter, stat. When you ask someone if they’re happy and they answer, “What does happiness really mean?,” it means that they are not. Ines has chosen masochistic practicality as an antidote to her father’s whimsy, but the two of them are more alike than she’ll ever admit. All of her corporate posturing is the exact same imitation game that he plays, but the grim barracuda she’s chosen to embody has much less fun, and the absurdities she endures (including what must be one of the strangest and least erotic sex scenes ever committed to film) are tragic rather than comic. When she’s too humiliated by “Toni Erdmann” to unmask her father in front of her colleagues -- after all, what would they think if they knew she was this cuckoo’s egg? -- her flustered attempt at playing along makes her an unwitting accomplice in his folly. It takes being dragged into his horseplay for Ines to see that you don’t have to live and die under one mask: New personas are allowed, and so are new adventures, new circles of friends, and new ways to be happy. And happiness -- isn’t that the point?

Two great performances form the backbone of this movie: one from Simonischek, who places Winfried and “Toni” exactly balanced between exasperating and inspiring, and one from Hüller, who makes herself into the picture’s true north by stepping outside the easy cliché of the thawing ballbuster and plunging into Ines’ contradictions with great empathy. Toni Erdmann is ultimately a comedy about courage -- the courage to live life, to embrace reality’s absurdity, to choose gusto over perfection, to throw your insecurities to the wind, to show up at a fancy shindig in goofy teeth and a wig and discover that the world will not end if you do, to end a serious, serious movie review this way: snarfle banana poo-poo bbi$uetn&as dirlp’crypb hkrl,dpcr’lb hkl.gypcr’lgp. Phbbbbbbbbbbt!

Hello, My Name is Doris

Hello, My Name is Doris