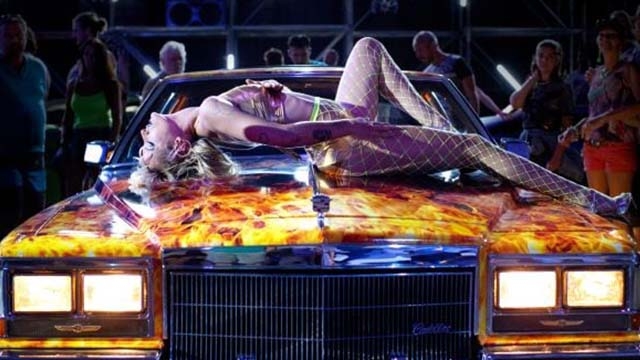 In Titane, written directed by Julia Ducournau (Raw), the horror-fantasy tells the story of the protagonist woman Alexia, played by Agathe Rousselle, who has a strong affinity for cars; she is injured in a car accident as a child resulting in a titanium plate being placed in her head. Upon leaving the hospital she sweetly caresses the driver's side window of her parents' car; an intriguing nod that carries out the theme of the rest of the movie.

Moving forward to the future, a now-grown Alexia is an erotic dancer at car shows. With her attraction to cars, Alexia is a star at this event, but when one of her male fans follows her out and forcibly kisses her, she violently kills him using a knitting needle she had holding her hair in place. While showering the murder from her skin, she responds to a heavy metallic thud at the door. The vintage Cadillac she was dancing upon earlier is flashing its headlights at her, and she enters it, naked. She later discovers the car has impregnated her and she goes on killing over and over again.

She cuts off her hair, binds her breasts and takes on the identity of a decade-long missing boy, Adrien Legrand. It is at this time that actor Vincent Lindon, the other main lead, is introduced as the fire captain and father of lost boy Adrien. The two are united through unusual circumstances as the movie shifts to a thriller, with Adrien (Alexia) working to protect his identity while he and Vincent grow closer and the pregnancy carries on. Meanwhile, the police are also closing in on their hunt to find Alexia the serial killer.

Presumably, Alexa wants to escape the police, and Vincent so desperately wants to believe that Alexia really is his missing son that he looks past the glaring clues to the contrary, but the guys on his fire team aren't convinced — nor are viewers, who can sense the movie building to a big reveal, at which point they discover whatever Alexia might be carrying in her womb. However, the movie never allows the audience to interpret that twist. Titane itself is the twist.
Titane is the winner of the Palme d'Or at the 2021 Cannes Film Festival. With this award in mind, the film is one of the strangest and most unnerving movies of 2021. There are several moments that induce fear and discomfort, more so than any recent horror film.

It feels rather impossible to recommend this film to others, and yet at the same time it is so incredibly cinematic and moving (even in the most horrific of fashions) that one simply must see it for yourself to understand. Ultimately, it's not be a film for everyone, but it is at least a true work of art.