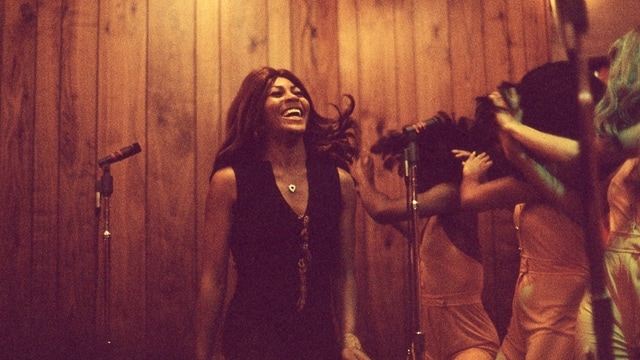 Tina, the HBO-exclusive documentary from directors Daniel Lindsay and T. J. Martin, tells the story of the always dynamic and sometimes tragic Tina Turner from her earliest days to her most recent triumphs. The raw honesty, including from Turner herself, makes for an engaging watch for its entire 2-hour running time.

Born Anna Mae Bullock in Tennessee in 1939, the first time she saw Ike Turner, she knew she wanted to sing. She pestered his performances until he finally listened to her voice and immediately put her in the band in 1957. This is where both their lives would change forever – his success based on her making him what he would become after their meeting, and her success as a solo act despite him. Her superstar status makes her a legend that will endure forever.

Tina’s story is told in five parts – “Ike & Tina,” “Family,” “Comeback,” “The Story,” and “Love.” Each takes a segment of her life and encapsulates it as its own set of memories. In every section, the conversations with Tina and the interviews with her associates are open and straightforward. This is sometimes difficult to watch, particularly in the first two parts. She doesn’t hold back on her feelings about how, when she wanted the past to remain the past, the press could not leave the subject of Ike alone.

There is a lot of care taken to ensure that the history progresses forward fluidly. This is partially driven by stock footage of moments in time and full videos of Tina’s performances. The interviews with her friends and associates fill out the story, which is a much better approach than having it be all Tina, all the time. Doing so would have come across as her writing the history of her story in whatever way she wanted it to play out, rather than exposing some difficult truths. There was a great deal of wisdom mixing Tina, her colleagues, her performances, and more in a delicious gumbo.

In addition to being a well-conceived biopic, Tina is also a farewell. As the film closes, her husband of 17 years and companion of 44 years makes that clear. A world inspired by this dynamic performer will miss her but can do nothing but thank her and wish her a well-earned retirement from a very public life – a life of which she can be river deep, mountain high proud.