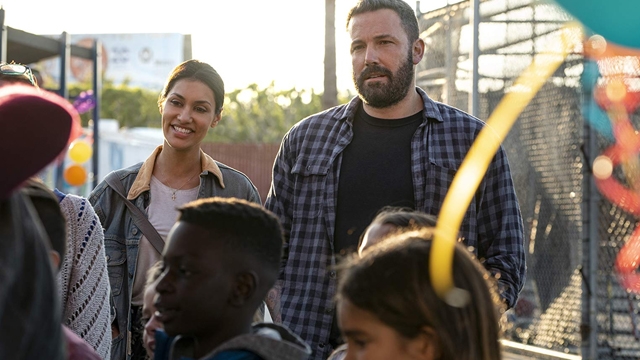 The Way Back is just as lazy and dull as the title suggests. Elements of the storytelling and cinematography are jumbled into a slapdash mess with innocuous emotional depth.

Jack Cunningham (Ben Affleck) is a grieving alcoholic who finds himself working as the new head coach of his Catholic high school basketball team. His love of the game breathes some fire back into his life and into those of his players. But his impetuous mentoring program directly clashes with the school’s Christian virtue-based teaching method, not to mention Jack’s nightly blackout-drunk bar crawl.

Directed by Gavin O’Conner, the story is riddled with pitfalls from which the film does not recover. It relies on several tropes and bits that are, to put it bluntly, cheap and nonsensical.

For starters, the running “comedic” bits to alleviate an assumed tension are horrendously written and performed. Kenny (Will Ropp) is a player continuously utilized as a running joke because he’s more focused on the girls before game time. It is bland storytelling that is wholly unfunny. The film shamelessly gives his character about the same amount of inclusion as Jack’s wife Angela (Janina Gavankar).

Jack’s consistent stream of profanities and the sly cuts to the priest’s grumpy reaction is yet another example of the lazy storytelling. The cursing is initially used as a means for laughs, but then as a set-up for the overly dramatic unveiling that there are worse things in Christendom than profanity – like alcoholism. The set-up is beyond tawdry, especially given that the film never goes very deep with Jack’s emotional connection with alcoholism – save for a brief counselor’s scene.

Instead, The Way Back prefers Jack to exorcise his demons via machismo and being tough on his players. The film doesn’t even attempt to condemn his methods either. The players reiterate his mantra of playing with a chip on their shoulder in the final game. While aiming to come across as inspirational by its end, many viewers will instead see that characters have learned and exhibited toxic behavior handed down to them from their coach.

Moreover, the relationships among Jack, Brandon (Brandon Wilson), and Marcus (Melvin Gregg) could be seen as promoting a white savior complex. With Brandon, Jack makes him a leader and gets his father to finally come to a game. With Marcus, Jack punishes him for his shortcomings before letting him back on the team. The absent black father and the “knight in white shining armor” are tired tropes best left in the past.

The Way Back is essentially a poor man’s Manchester By the Sea. Identical story elements exist in both: a drunk, grieving, and angry man forced to mold the lives of younger men. But while Manchester grapples with the enormity and irrevocable damage of grief, The Way Back insists on seeing itself out of the darkness. This comes with the territory of the sports-drama genre that ultimately needs a positive outcome. But the typical, inspirational mechanisms of the genre are at odds with the concepts of grief and depression that aren’t easily won over.

The camerawork in The Way Back is another disorganized predicament. Several times throughout the film, the camera will zoom-in during an emotional scene, like when Jack finds out his ex-wife is with someone else. It’s an obvious and heavy-handed approach to push the emotion on a scene that doesn’t require it.

Another odd tactic is the frequent use of freeze frames during the basketball games. Again, it’s a staple of sports films but one may find it too kitschy here. Still, the camera captures the setting beautifully. The hazy backdrops of oil rigs, water and the city are quite breathtaking in fact.

Unfortunately for The Way Back, a beautiful backdrop does not make a film. Alcoholism and the death of a loved one are meaty subjects, but the film doesn’t attain a lofty emotional response it hoped for.