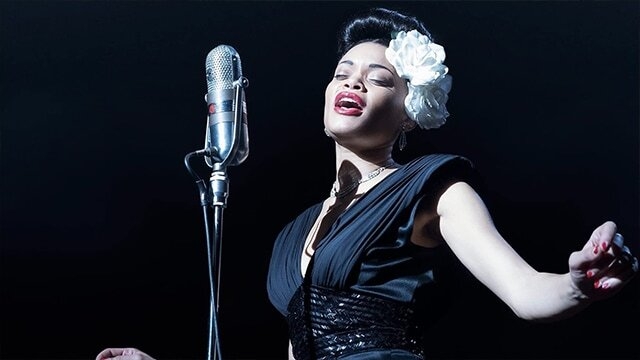 Stylistic director Lee Daniels (Precious) once again takes on a controversial subject, this time tackling the story of torch singer Billie Holiday and her troubles with federal agent Harry Anslinger at the beginning of the war on drugs. He takes the powerful script by Suzan-Lori Parks and crafts it into a brilliant but slightly flawed testament to the singer of what is arguably the first civil rights song, “Strange Fruit.”

Billie Holiday (Andra Day) is paid for an interview with Reginald Lord Devine (Leslie Jordan). At first, he fishes for the controversy and spectacle but is warned off this track. He need not worry about whether his interview would have titillating details. Once Billie gets into her story, there is certainly enough controversy to sell the tale. What ensues is a story of a woman tortured by her past abuse as well as her present, abusing drugs and alcohol. The latter makes her a target of Henry Anslinger (Garrett Hedlund), a federal agent using black investigator Jimmy Fletcher (Trevante Rhodes) to further his racist agenda via a war on drugs.

Based on Johann Hari’s Chasing the Scream: The First and Last Days of the War on Drugs. the script is powerful and raw. Rather than water down the life of Billie Holiday, it meets the good and the bad with full force.  The film begins with an interview, but this scene and all others featuring Jordan are unnecessary because the tale really starts when Anslinger and the congressmen he conspires with come into the picture. After this, the focus is primarily on Holiday. The film’s real climax is a compelling series of vignettes showing her early life and leading to her present fears, struggles, and anger. As brilliant as this scene is, it also takes some of the wind out of the story that remains, making it seem a bit repetitive and dull. This (along with the unneeded scenes with the interviewer) is the only blemish in an otherwise spectacular film. It is unfortunate just how large a flaw it is, and quite surprising that its deflating effect on the rest of the film slipped by Daniels.

Otherwise, Daniels throws every ounce of passion he has into making the tale engaging, forceful, and poignant. It is no surprise that, beyond the civil rights issue, he includes the subjects of conflating drugs with blackness and a hint of LGBTQ oppression. Doing so demonstrates how problems that began to explode in the 1970s were already simmering at least as far back as the mid-20th Century. It also shows that there is still a long way to go on roads that we’ve barely begun to travel. Daniels’ goal is reached primarily through a stunning portrayal by Day in her first feature performance. She exudes the passion and pain of the iconic Holiday in a way that few others could have. In both role and voice, Day is near perfection, capturing the tone and the innovative vocal techniques that Holiday originated. The rest of the cast performs well, particularly Rhodes, but Day dominates the screen in a film with virtually no scenes that do not include her.

Like the singer’s voice, the places she performs are dusky and dark. The crew paid close attention to the details, and the viewer can almost smell the booze and cigarettes in the deepest of the dives. Even the scenes in Senate chambers have the reek of these and more. Careful cinematography sets the stage, whether it be the courthouse steps or the interior of a cross-country tour bus. From a technical standpoint, there is little to complain about.

The United States vs. Billie Holiday is the story of an often-overlooked vocal innovator whose most controversial song was the civil rights movement’s herald. More importantly, it is a statement that there is no coincidence that the beginning of the war on drugs is tied to the budding demand for rights. In this, Billie Holiday’s story becomes the story of the battle of being black in America.