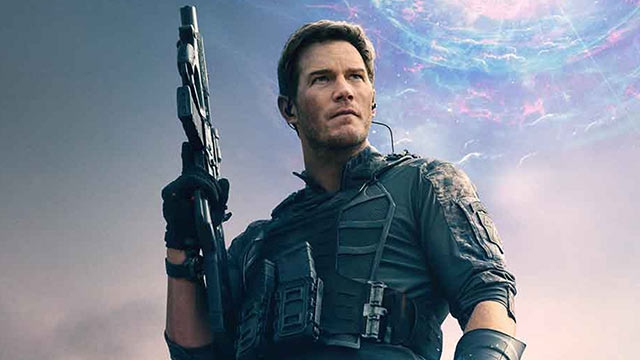 The Tomorrow War is an action-adventure film set in a sci-fi version of Earth. When family man Dan is drafted into a war from which very few recruits return alive, he's forced to confront his past so that he can fight for the future of the planet. Determined to make it home alive to his family, Dan tries to make the best decisions possible to stay alive, but also protect the continuation of all humanity.

Dan Forester (Chris Pratt) is a tough guy with big dreams. Despite his warm, welcoming biology teacher exterior, he's a former Green Beret who aspires to become a scientific researcher. Unfortunately, his checkered past prevents him from getting a job at the research center of his dreams. But still, he's a happy dad and cheerful husband. All of that is set aside when suddenly, soldiers from the future arrive with a grave warning: all of humanity is on the brink of being wiped out in the not-too-distant future. An alien race that humans call the Whitespikes have invaded earth and killed almost everyone in a matter of years. The world bands together to send soldiers to the future to help out, using a time traveling device called the Jumplink. Unfortunately, a grim fate awaits most soldiers who do take the jump, so a worldwide draft is set. Dan ends up getting drafted and putting his former military skills to good use – especially when he can blend his scientific background as soon as he arrives from his own jump.

Ushered into utter mayhem in Miami Beach, Dan and his company are commanded to rescue some nearby scientists who are researching an effective weapon that humans can use to fight the alien invaders. With their research in hand, Dan and the few surviving members of his unit make it out alive. But after capturing a rare female Whitespike, they're bombarded by protective, violent males. The fight seems grim for Dan and his ragtag band of soldiers. Will he be able to get the secret weapon into the right hands before they're overrun?

Directed by Chris McKay (The Lego Batman Movie, television's Robot Chicken) there's tension throughout The Tomorrow War despite its two-hour, eighteen-minute run time. His deft hand manages to keep things moving while at the same time revealing backstory, in the future, and staying focused on the characters that matter amid mobs of soldiers and aliens. Surprisingly absent is McKay's trademark sense of humor, as he decided to go very serious with this film, despite the borderline ridiculous, though high-concept plot.

Time travel movies are notorious brain-scratchers, but the science behind The Tomorrow War seems relatively solid and the time warping events are well handled. The choice of character focus is intelligent, despite Dan's overt superhero quality of being good at everything. Somehow managing to tug at the heartstrings in some moments despite the constant carnage, there's enough to love about The Tomorrow War to ignore the inconsistencies. A well-rounded cast and some great fighting scenes along with rather terrifying aliens make this a surprisingly family-friendly affair.