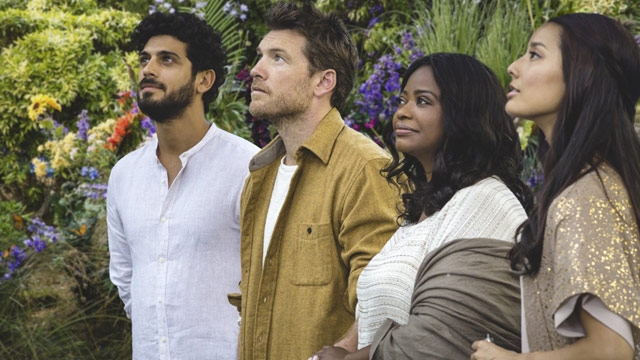 Who knew that God makes heavenly homemade biscuits and is especially fond of singer Neil Young, that the Holy Spirit collects human tears to help gardens grow, or that Jesus carves richly detailed coffins for murdered children? Those are just some of the insights into the Holy Trinity awaiting moviegoers who buy a ticket to director Stuart Hazeldine’s well-intentioned but misguided drama, which is based on William Paul Young’s best-selling novel.

Sam Worthington stars as Mackenzie Phillips (why the character has the same name as the popular 1970s actress from One Day at a Time is a mystery), who is first seen taking his three children camping in the Oregon wilderness. When his two older kids overturn their canoe, Mack jumps in to rescue them; unfortunately, that leaves his youngest daughter Missy (Amélie Eve) alone onshore, and she is soon abducted by a serial killer and murdered in an abandoned shack. Sometime later, Mack receives a note in his mailbox signed by “Papa” (his wife’s nickname for God), which asks him to return to the shack because Papa misses him. Mack thinks it’s some kind of sick joke, but nevertheless, he drives out to the rickety cabin, prepared to gun down the monster who killed Missy. Instead, he’s met by a hip-looking young man with gorgeous black curls who asks Mack to follow him. The man, who we soon learn is Jesus (Avraham Aviv Alush), leads Mack from a wintry landscape into a sun-splashed paradise overflowing with lush foliage, and invites him into a homey cottage -- there, he meets Papa (Octavia Spencer), a motherly Supreme Being, and Sarayu, a serene Holy Spirit (Japanese model Sumire Matsubara). Papa tells Mack she asked him back to the shack because “that’s where you got stuck.” She wants to help him heal, and to do that, he must lay aside his anger and learn to forgive not only the man who murdered Missy, but also the abusive father he poisoned when he was a teen.

The Shack raises some thorny, perplexing questions, such as why God allows evil to invade the lives of innocent people when he could obviously prevent it, but the lackadaisical, mind-numbing script (credited to John Fusco, Andrew Lanham, and Destin Daniel Cretton) is content to merely skim the surface, and never comes close to exploring the disturbing issues it raises. It also doesn’t help that Worthington, an actor of very limited range, is miscast here: His Mack goes through the motions, but Worthington is never able to make us feel the depths of his burning anger and heart-crushing hurt, which robs the movie of much needed emotion. Sadly, he’s just the latest in a long line of limp cinematic Christians, who frequently seem more like caricatures than flesh-and-blood human beings we can identify with.

And then there’s that Trinity. The always dependable Spencer is sweet and warm and all embracing; her saccharine Papa is perfect for people who prefer a God who is all hugs and kisses. She’s a God you’d feel comfortable inviting over to your house for drinks and introducing to your friends, but hardly one you’d bow down and worship. As for Jesus, he’s more of a pal than a deity. He and Mack walk and run on water together like besties, and he says he’s looking for friends. Poor guy. And Matsubara’s Holy Spirit? She’s more Zen than Christian, a tranquil gardener with an amazing green thumb.

The message of The Shack is: “God has a wonderful plan for your life, even though it may include heart-piercing tragedy. But fear not, because he’s ready to give you a warm bear hug and some piping-hot biscuits right from the oven.” If that’s your idea of God, then by all means enter The Shack. For everyone else, check out Silence, Tender Mercies, Babette’s Feast, The Mission, Ordet, Shadowlands, The Seventh Seal, or even Bruce Almighty for a more penetrating look into faith and man’s fascinating, complicated relationship to the invisible, mysterious deity we call God.