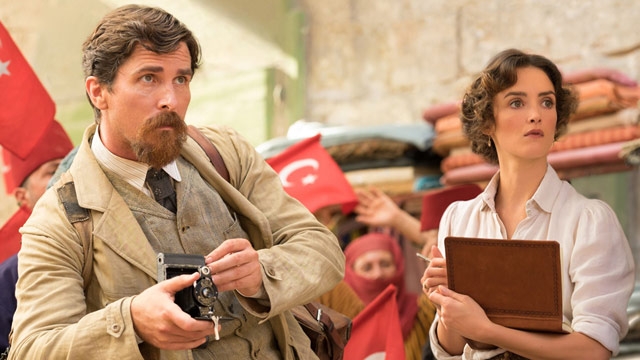 In 1914, during the waning days of the Ottoman Empire and the start of World War I, an Armenian apothecary named Mikael (Oscar Isaac) plies his trade in a small Turkish village. He yearns to go to medical school in Constantinople to become a real doctor, but there’s no way he can afford the tuition -- unless he marries a perfectly fine but unremarkable local gal (Angela Sarafyan) and uses her dowry to fund his education. He promises to speed through his studies and return in only two years, but while he’s residing at the mansion of his wealthy rug-merchant uncle, he meets Ana (Charlotte Le Bon), the spirited music teacher tutoring his nieces. Ana’s lover is an American journalist (Christian Bale) who drinks too much and makes an ass of himself at parties by decrying Turkey’s increasingly hawkish military policy. Meanwhile, Mikael brightens every time Ana enters the room and allows her to wipe some smeared chocolate from his face after a dinner party. Do you see where this is going?

The “promise” of the title refers to Mikael’s vow to his betrothed that he will return home to her after his studies, even though everyone can see that Ana is the better match. But it’s a misleading title because that promise is such a small portion of what’s thrashing around in this movie, whose plot includes orphans, massacres, stolen glances, missed connections, advancing armies, explosions, peasant uprisings, trains, and a street assault that ends with someone throwing cabbages (yes, really). It doesn’t help that, on several occasions, a character thought dead suddenly reappears to soaring strings and tears, only to be thought dead again, only to be proven alive once more, etc., etc. In one case, a sudden jump cut from a character in peril to a church service in which everyone is veiled in black generates the reasonable assumption that someone has died, but a few scenes later we discover that was never the case. Director and co-writer Terry George (who also tackled the Rwandan genocide in Hotel Rwanda) is either assuming we know that’s what every Armenian Orthodox church service is like, or he’s never heard of the Kuleshov effect.

Adolf Hitler allegedly scoffed at hypothetical naysayers of his planned invasion of Poland (and subsequent launch of the Holocaust) by stating, “Who, after all, speaks today of the extermination of the Armenians?” Not American cinema, that’s for sure, with the except of a few features -- the most remarkable of which might be Ravished Armenia (1919), a sanitized recollection of the experiences of lead actress Aurora Mardiganian. While the Armenian genocide is certainly worthy of inclusion in our collective memory, The Promise suffers from the same problem as almost all Holocaust movies, which is that history is told by the survivors. When any character, especially a protagonist, survives to the end of a film about genocide, the story becomes just another “triumph over adversity” adventure instead of an attempt to understand an atrocity of incomprehensible proportions. It’s not an impossible task -- The Killing Fields and Schindler’s List manage to do it -- but The Promise isn’t the first movie to fall short. It tries to refract the deaths of one and a half million people through the prism of a love triangle, but a genocide isn’t a beam of light and there’s no rainbow shining through on the other side.