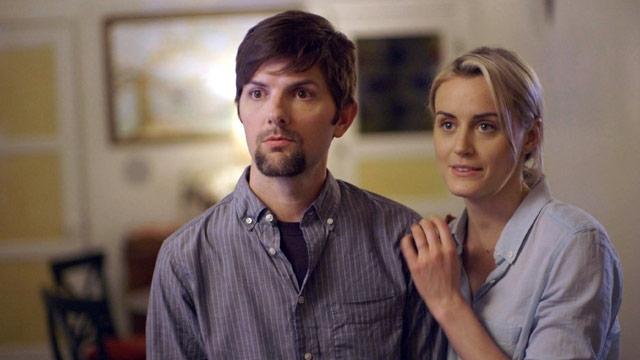 How well do you know your spouse? How much do you trust that person? How honest are you with him or her about what you’re thinking, what you really want, how satisfied you are with your life? These questions — mundane on the surface, potentially depressing when answered — are rarely explored with any degree of depth or intelligence in the dramas Hollywood puts out. Which makes it all the more impressive that the comedy The Overnight is willing to tackle them head-on, as it uses a seemingly wacky premise (two couples get together for a night of fun that takes a turn toward debauchery) as a way to look at the compromises of marriage and parenthood. And make jokes about penis size.

Alex (Adam Scott) and Emily (Taylor Schilling) are a couple with a young son who have recently moved to Los Angeles from Seattle, and they’re feeling a little out of sorts — they have yet to make any new friends, and caring for their child has left them constantly exhausted and sexually unsatisfied. As a result, they see it as a major victory when their son’s new playground pal has a hip father named Kurt (Jason Schwartzman), who is quick to invite all of them over for an adult get-together/child playdate.

Alex and Emily are soon in awe of Kurt’s mansion-like house, his do-gooder job involving water-desalination machines used in third-world countries, his liberated French wife Charlotte (Judith Godrèche), and even his peerless ability to get the kids to go to sleep (his bedtime ritual for the little ones includes a laser-light show, incense, and a lullaby performed on an electric keyboard). The adults decide to keep the party going even after their children are conked out, and little by little, Kurt and Charlotte’s free spiritedness reveals itself to have some pretty weird undercurrents. Just for starters: Charlotte stars as a topless model in videos for breast pumps (and isn’t shy about showing off her work), while Kurt is a painter whose specialty is people’s anuses. As the night drags on, Alex and Emily are never quite sure how to react to the other couple. Are they repulsed, intimidated, or turned on by their openness? Are Kurt and Charlotte looking to swing with them, or are they just very, very friendly? And is their lack of sexual inhibitions a sign that their marriage is much healthier or much more dysfunctional?

What really makes this story work — and what eventually gives it an edge — is that Alex and Emily are depicted as neither completely content nor embittered. A less perceptive movie would have aimed for cheaper laughs and easier drama by going one route or the other, either making them an uptight, “perfect” couple who are mortified by Kurt and Charlotte’s frankness, or two people whose relationship is so obviously troubled that some sexual experimentation might be necessary to set things right. Instead, their marriage seems fairly normal; they have their issues, but they love and trust each other. What really terrifies them isn’t any problem in their lives right now, but the possibility that there are people out there who have figured it all out: Who have wilder sex lives, less stress when taking care of their kids, more energy and money and free time. Of course, comparing your happiness to somebody else’s is usually a mistake, because you’ll always assume other people are happier than they really are.

The Overnight is already notorious for a moment in which Scott and Schwartzman, both wearing prosthetic appendages, go full frontal before their wives during a skinny-dipping session. It’s a hilarious scene, and it’s typical of the level of honesty and potential embarrassment that the film asks of all four actors (aside from the children, they have the only speaking roles in the movie). Scott and Schilling are very good here as two people struggling with their desires, making their characters seem normal on the surface while hinting at deeper quirks, and Godrèche is game as a trophy wife who’s just a little off. But the movie belongs to Schwartzman, possibly the only actor right now who could have made Kurt seem like a real human being and not a caricature. He’s a total weirdo, yet so genuinely friendly that you’re forced to take him at face value, and that balancing act is what makes The Overnight work. Even better, the filmmakers do a great job of surrounding him with the kind of exact details that fill in his hipster-bourgeoisie lifestyle (for example, he’s wearing those leather friendship bracelets that are becoming de rigueur in men’s fashion), providing the movie with a degree of authenticity that helps ground its more outrageous twists.

The Overnight fully commits to exploring these characters and what they want, and it doesn’t blink at the end — it builds to a provocative moment that challenges us, rather than letting things fizzle out in ambiguity or safe platitudes about how marriage is difficult but worthwhile. Funny, humane, kinky, and painfully honest, it’s a movie that will get under your skin.