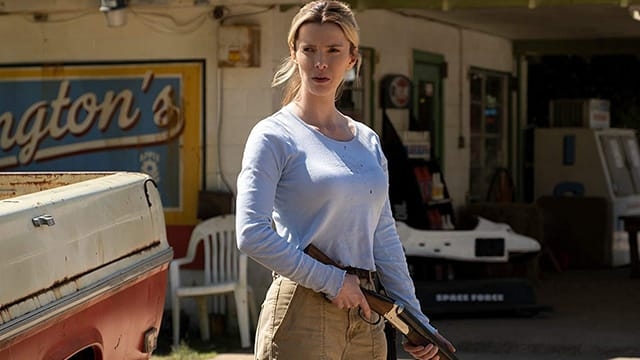 The Hunt, from director Craig Zobel (Compliance) and writers Nick Cuse (HBO’s Watchmen) and Damon Lindelof (World War Z), promises to be a satirical version of The Most Dangerous Game, set in the modern social media climate. But any message that the writers intended to show through the satire is lost in a script more painful than that of a below-average spoof.

Twelve people wake up with gags in their mouths near a field that has nothing but surrounding woods and a large crate. Bewildered, one of them chooses to open the container, revealing weapons of all sorts. As soon as the group begins arming themselves, chaos breaks loose, and shooters pick several of the confused captives off from a distance. The survivors add to the victim count until only a few remain. At this point, the lines become blurred between who is the hunter and who is the hunted as one member, Crystal (Betty Gilpin), begins to fight back.

It is unfortunate that something with such potential to provoke thought, discussion, and understanding of different viewpoints through satire suffers so much from poor writing. As a relative newcomer to feature-length scripts, one might forgive Cuse for some of the errors. But in Lindelof’s longer career of hit-or-miss writing, his arrow flies very wide. The stereotypes, what little we see of most of them, are not played correctly for satire and aren’t engaging at all. Even when tropes are turned on their ear a bit, it merely comes across as tedious, juvenile, and worthy of eye-rolling rather than compelling interest. There are a couple of very brief conversations in the film that give a glimmer of hope. Sadly, they serve more to show what could have been rather than representing any salvation to the story.

While the script makes Zobel’s direction suffer, he does manage to elicit excellent performances from all the actors – whether they have one minute or an hour or more on-screen. Gilpen’s performance is nearly flawless as the apathetic survivor bent on escaping her no-win situation. And even though we only get a few minutes of her as Athena, Hilary Swank reminds the audience why she has two Academy Awards.

The sets are well-executed, showing the audience just enough clues that they can do some deduction and detection between truth and lie. Unfortunately, these don’t overshadow missed opportunities in the script to do the same, detracting from their quality. Some of the cinematography is choppy and blurred, seeming to indicate some last-minute changes in the film. This likelihood is made more evident in the realistic special effects – when we get to see them.

Even with some good qualities in its attempt to show that not everyone is who or what we assume them to be, The Hunt never makes enough of a connection with the audience for them to care. This rests solely on the lackluster script that is more deplorable than any of the characters in it.