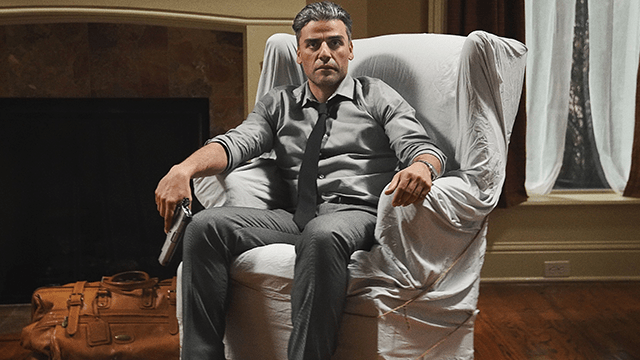 The Card Counter is a redemption and revenge thriller, with casino tables as the seamy backdrop for something darker. A gambler named William Tell is counting cards while trying to block out his shady past. When he finds friendship in a young man on a dark mission, and as love appears in an unlikely place, he rethinks his own death quest.

William Tell (Oscar Isaac) is a routine-loving loner with some odd habits. He’s in prison for committing war crimes in Abu Ghraib; but with nothing to live for, he makes the most of his time by figuring out how to play cards. Even after his release, he confines himself to card houses where he wins just enough to earn an income, without invoking suspicion. His motel rooms become a literal whitewashing for his tortured past as he covers up everything in the room with white sheets.

Gordo (Willem Dafoe) is a military contractor turned presenter giving a talk about interrogation techniques, and how he can train the police to use them. Tell wanders into the talk to see the man who trained him to torture in Abu Ghraib. He ends up meeting Cirk with a C (Tye Sheridan), a young man whose father had served with Tell.

Cirk wants to capture, torture, and kill Gordo because he committed war crimes for which he was never punished. So, he relays that plot to Tell. But Tell knows the plan is doomed and that even if he were successful, Cirk wouldn’t find happiness. Instead, Tell takes Cirk under his wing and teaches him about cards. He finds a poker tour bankroll rep named La Linda (Tiffany Haddish) to win a bunch of money and raise funds for Cirk to get him out of debt, so he can focus on something other than revenge.

But Tell ends up falling for La Linda and finding that now he’s got something to focus on other than the guilt of his own past. Will money be enough to stop Cirk’s thirst for exacting revenge? And will Tell find a reason to live that makes up for his dark past?

Written and directed by Paul Schrader (First Reformed, Affliction), a true master’s hand is seen gracing every scene in The Card Counter. At once a story about people whose lives are all professionally formed by letting random chance govern them, at the same time, they take matters into their own hands. Strong acting and sharp dialogue with voice-over narration match the methodical pacing and deeply dark nature of the script.

Slow enough to turn off those seeking instant gratification, The Card Counter builds methodically to a gripping boil. Fine performances portraying broken people elevate a strong script into a work of art, which may not appeal to everyone. Dealing a heavy hand of guilt, this casino torture blend expertly lays its cards down slowly, delivering a full house.