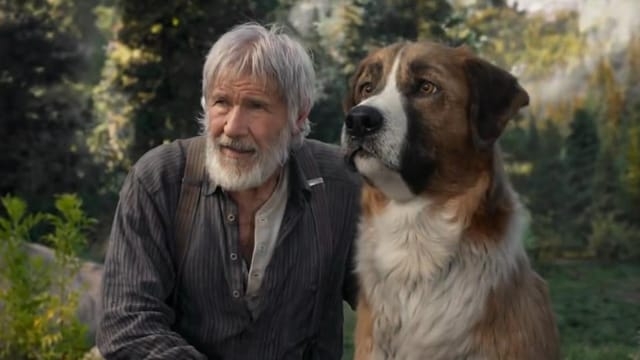 Jack London’s iconic novel The Call of the Wild, written more than 100 years ago, bounds to maximum charm in this film adaptation. Director Chris Sanders finds the fine line between the silly and the serious, the lovable and the spiritual, in order to pull the whole family into the adventure, bit by bit.

Harrison Ford as the hermit John Thorton narrates the story of Buck – a big, goofy dog forced to find his place in the world. He is kidnapped, abused, and sold as trade within the first few breaths of the story. As a result, the film immediately solidifies the loyalty of its audience. It doesn’t get more wholesome than vulnerable dogs and the gravelly voice of Harrison Ford.

The Call of the Wild is mostly curious, however, in how it differentiates itself from the rest of the pack. Historically in cinema, narratives about dogs are adorable and heartfelt. But many of them entail adventures in hijinks of typical suburban America. Think Beethoven, My Dog Skip, or even Beverly Hills Chihuahua. They often focus on how dogs fit into the idea of the perfect American household or the American Dream. Not until the emotional wallop of A Dog’s Purpose did films start to how humans fit into a dog’s world.

Given The Call of the Wild’s source material predates any and all dog stereotypes in film, it definitely has a leg up in the game. Instead of the story circling back to Buck returning to the traditional human home, he finds himself pushed and pulled further away, back to his ancestral roots. It’s a grand epic about finding strength and courage in the innate spirit of the wilderness.

At first glance, the heavy use of CGI for Buck in an environmentally spiritual film might seem like a misfire. However, it is the best option to emphasize the hidden emotions of animals. Using a real-life dog, such as in Homeward Bound or Beethoven, would flatten his emotions in an uncinematic way. If they had used real dogs with human-dubbed voices, like in Beverly Hills Chihuahua, The Call of the Wild would have gone from spiritual to spazzy.

But by seeing a range of emotions exaggerated in Buck’s eyes and movements, we are welcomed into his internal headspace. We know exactly when he’s happy or scared or confused, which is necessary in a story that reveals the toll of the human world on him.

The physical humor tempers this iteration of The Call of the Wild into feel-good, family territory. The slapstick gags of making messes and being a pain in the neck is standard and cute. But the over-exaggerated human characters make some messes, too. Apart from Ford, almost all the humans come across as heightened cartoons to varying degrees of success.

Buck’s dog-sled team leaders are two of the best whimsy human examples. Perrault (Omar Sy) stands out in his striped sweaters and steampunk goggles. Meanwhile, his wife Francoise (Cara Gee), in her novelty sunglasses of the late 1890s, nails her sarcasm in such a plaintive fashion that it’s like watching an episode of Daria. Their vignette in the story shows off some serious Wes Anderson influence.

On the opposite end, Dan Stevens’ villainous character is just too much. He’s a vaudeville parody made from a red plaid suit, creepy mustache, and an over-the-top saloon-esque accent. But the farcical physicality reins in the film from being too disturbing for young viewers. It takes the safe bet by broadening the scope to the widest possible audience.

The Call of the Wild, as a result, has a little something for everybody. It tugs at the heartstrings of adults, at the sense of adventure in kids, and at the overwhelming awe of nature that resides in us all.