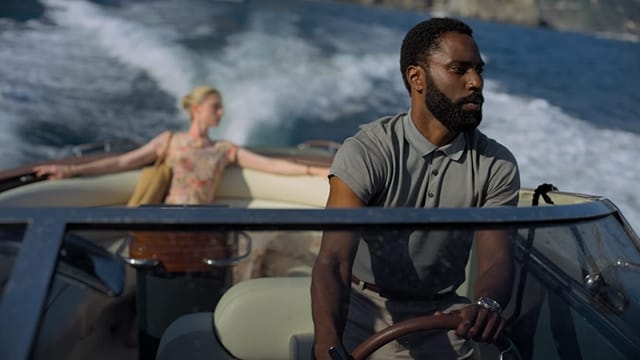 Writer/director Christopher Nolan (Dunkirk) once again turns his thought-provoking script into a convoluted, visual and mental feast with Tenet. Like in his earlier outing Inception, some bends and turns can be hard to keep up with, but that is half the fun of this excellent, time-twisting thriller.

After waking up from what he thought was a mission that ended in suicide, The Protagonist (John David Washington) is informed that he has “passed the test” and has joined an elite few among the CIA. His next mission is to make contact with a group known as Tenet. Ultimately, his goal is to stop Andrei Sator (Kenneth Branagh), a present-day madman dealing with terrorists of the future, from initiating World War 3. But instead of nuclear Armageddon, The Protagonist faces a more difficult challenge, stopping the destruction of time. With the help of Sator’s wife Kat (Elizabeth Debicki) and Tenet members Neil (Robert Pattinson) and Ives (Aaron Taylor-Johnson), The Protagonist weaves through plots running in both directions in a mind-bending attempt to prevail.

The script is solid, displaying the years of work that went into it. Even with the elaborate plot, the story flows consistently and rarely becomes difficult to follow, even if the details are sometimes dizzying. The Protagonist comes across as an everyman hero despite his advanced training – someone just doing his job, thrust into a complex situation that he must see through to the end. Regardless of the input of theoretical physicist Kip Thorne, the science does seem to get questionable at times. Fortunately, Nolan doesn’t bog the story down too much trying to explain it. Together, he and Thorne provide just enough information to keep the viewer within the realm of plausibility and engaged with the even story. There is one distraction in the writing, and that is the lack of character development. They are all who they are, from beginning to end. The difference is that the audience might not realize who they are, making the lack of dimension forgivable.

Because the characters are straightforward, it makes them easy to play for the talented actors recruited to the roles. Branagh is deliciously, unabashedly self-centered and evil. Washington is the infallible hero that everyone roots for from beginning to end. Pattinson’s sidekick with more to offer is portrayed to perfection, as is Debecki’s maligned wife, who seeks not only to escape but to avenge herself.

There is excellent use of backward-playing music and sound effects that are very fitting to the film, cleverly conceived and executed to give the audience an inverted feel. It is subtle enough that the audience may or may not notice it. As with the music and sound effects, some surprisingly crisp fight scenes move both directions in time, often simultaneously. Despite the complexity, they are not difficult to follow. This holds true of chase scenes as well. This clarity is a testament to the exceptional work of the cinematography and effects teams.

Tenet isn’t exactly the film that previews make it out to be. This may be part of the point – to show the audience something, and then make them realize it isn’t quite what they thought.  For Christopher Nolan, inverting the norms of filmmaking philosophy is the intent – and so far, it works.