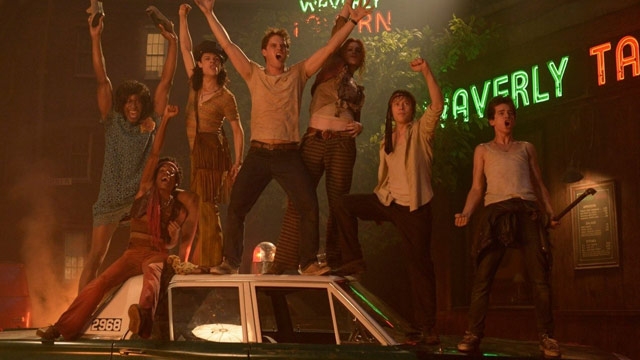 The ghost of 1969’s Midnight Cowboy haunts every movie about a new face in a big city, and this time the wide-eyed hayseed is Danny (Jeremy Irvine), an Indiana blond who gets off the bus, suitcase in hand, at Greenwich Village’s Christopher Street, where he immediately makes the acquaintance of Puerto Rican queen Ray (Jonny Beauchamp) and his wolf pack of swishy hustlers. Danny’s on the run from a small-town scandal linking him with the local star quarterback, but even under Ray’s protective wing, 1960s New York is no paradise. By day, the young gay men weather the sneers of longtime residents; by night, they cruise the streets and pile by the dozens into a single fleabag hotel room. Local laws make it illegal for “disruptive people” (read: homosexuals) to gather publicly and be served alcohol, so they’re forced to congregate at the Stonewall Inn, a mob-run dump without running water, where used pint glasses are rinsed in filthy washbasins and police raids inspecting them for gender-appropriate clothing are a constant, humiliating nuisance. But everything changes one summer night when, after a raid, an arrestee escapes from the back of a police cruiser and shouts to the crowd, “Isn’t someone going to do something?”

This passion project about the ground zero of the gay-rights movement in America is a detour for (openly gay) director Roland Emmerich, who’s mostly known for sci-fi spectacles like Independence Day and Stargate. He does bring a certain apocalyptic grandiosity to the final scenes of the riot, as the provoked bar patrons kick and punch police and squirt blazing lighter fluid all over the door, barricading the cops inside. He also gets points for historical accuracy and inclusiveness, making room in the story for key players like pioneering trans activist Marsha P. Johnson (even if this multicultural New York story is still told through the eyes of a white, Midwestern man).

But Emmerich leans too heavily on our 21st century perspective to justify his characters’ actions. We’re supposed to sympathize with these unfairly oppressed outsiders, but judging from the street kids’ behavior in this movie, maybe the neighbors don’t like them because they’re a collective public nuisance, having sex in alleys and breaking shop windows to steal hats they fancy. Even Trevor (Jonathan Rhys-Meyers), the only character with his eye on the organized gay-rights struggle of the future, ends up being a cad. And Trevor’s thoughtlessness is only the tip of the iceberg: Considering how brutally gay men treat one another in this film, beating up tricks like Ray for kicks and forcibly pimping Danny out to older, vaguely sinister customers, it’s a hollow victory that they end up standing shoulder-to-shoulder and forming a Rockette line in defiance of the advancing riot police.

Aficionados of queer cinema might remember that a very similar film was released in 1995: director Nigel Finch’s identically titled Stonewall, which also centered on the story of a country boy being shown the ropes by a resiliently glamorous drag queen. Emmerich’s version is bigger and louder, but it’s not necessarily better. Judy Garland died a few days before the Stonewall riots, and her and Mickey Rooney’s earnest “Come on, kids! Let’s put on a show!” mentality infuses every hokey “inspiring” speech in this movie. Compared to a genuinely rousing gay-rights historical drama like Milk (2008), Stonewall falls considerably short. The best advice regarding it can be summed up in Marsha P. Johnson’s explanation of what the “P” in her name stands for: “Pay it no mind.”