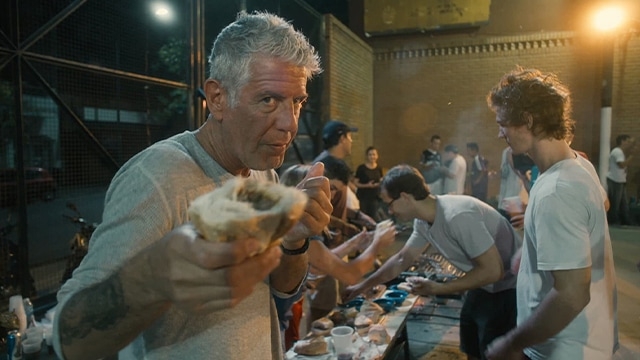 Roadrunner: A Film About Anthony Bourdain

Roadrunner: A Film About Anthony Bourdain is a documentary about the life and death of the celebrity chef and world traveler. Baffled by his sudden suicide, the movie attempts to piece together the life of a beloved international star. The titular figure of this documentary is the celebrity chef and author of "Kitchen Confidential." His charismatic television presence usually involved his traveling the world and having a wonderful time of it, such as his starring role in CNN's Parts Unknown. Cobbled together clips of Bourdain run the gamut of emotion and human experience, showing his jovial and fun-loving side for which people knew him, but also revealing a darker side in which there's something missing from the public eye. Haunted by addiction, depression, and his own doubts about himself, Bourdain's ghosts sometimes pop up in his witty quips, like when he says, "Here's a little preemptive truth telling: there's no happy ending."

Bourdain's rise to stardom starts with his career as a chef, where he was part of a chauvinistic culture that he both enjoyed and despised. He turned his back on it with the release of his book "Kitchen Confidential," which proved to the world his ability to tell stories and charm them with his personality. He followed the books up with "A Cook's Tour," which focused on his culinary world tour, and "The Nasty Bits." The television show version of A Cooks Tour helped launch Bourdain's rise to international stardom. Bourdain continued on with more world traveling foodie paradise shows such as, No Reservations, The Layover, and Parts Unknown, which ended abruptly with his death. Baffled by why a successful and seemingly happy person would take his own life, people wanted answers. Oddly enough, most of the answers were there all along, in Bourdain's well-documented life.

Following his creative evolution from chef, to addict, to lover, to television personality, Bourdain throws himself headfirst into everything he does. For better or for worse, his commitment brings him above who he believed himself to be, rising past his visions of his own mediocrity to a person who is recognized, awarded, and loved. Directed by Oscar winner Morgan Neville (Won't You Be My Neighbor?, Twenty Feet From Stardom) there's a brutal honesty at work in Roadrunner: A Film About Anthony Bourdain. Interviews are raw and authentic, a testament to Bourdain's friends as much as it is a nod to a great director whose competent hands slowly try to piece together an incomplete puzzle. Emotional from the get-go, Neville reels you into the joy, only to drop you down into the darkness.

The movie, like all of Bourdain's appearances, are like he self-admittedly proclaimed. It's not about the food, it's about Bourdain growing as a person. That being said, the narrative is as scrambled as his own lifestyle. There's not a clear story, nor a clear arc of any kind, but more of a desperate attempt to hold onto everything before it all comes crashing down – which it inevitably does. As much about the death of Bourdain as it celebrates his life, Roadrunner: A Film About Anthony Bourdain is a relentless adventure with a difficult ending. Shining unforgettable moments and a clear view of a life lived intensely, there are surely truths to be found amid the relentless journey. The film does not however, attempt to reveal the meaning of life, nor the "why" behind death.