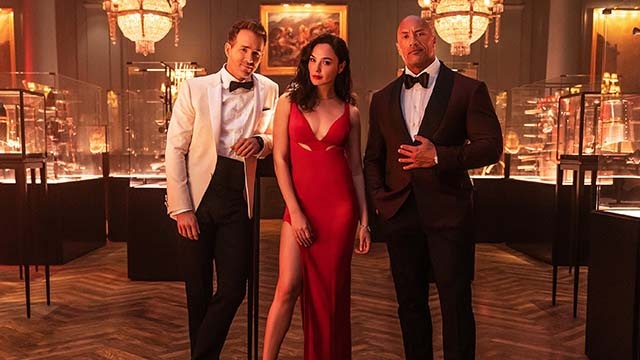 Red Notice, an action-comedy starring Gal Gadot, Dwayne Johnson, and Ryan Reynolds, is the latest Netflix original film. Written and directed by Rawson Marshall Thurber (Skyscraper), the film gets off to a rocky start but coalesces into a surprisingly enjoyable tale.

Thurber’s script starts with several clichés, setting the audience up to expect a very cookie-cutter dramedy. Fortunately, the well-choreographed escape scene is an early turning point that changes this quickly. There are frequent moments when the audience will feel they know what to expect, but clever writing and deft direction make for some surprising turns. This enables what starts out looking like a twist on the buddy cop duo to morph into something unexpected. Red Notice is another case of a writer who directs, and in this instance, Thurber knows and gets exactly what he wants. This goal is helped along with the great chemistry between the three leads. That isn’t to say that a lot of suspension of disbelief in the characters and the story isn’t required. Still, that is frequently the case with this type of film. It never crosses the line into farce, but it does tread the edge pretty closely.

The choreography for the fights is enjoyable and clean, suggestive in its own way of some of Jackie Chan’s best work. They’re frantic but easy to follow, thanks to crisp cinematography. The sets are well-conceived, and, like the fights, there are several moments reminiscent of other films, adding to the overall fun.

Red Notice looks like more standard fare in the not-so-compatible cop team genre. And while it does have many elements of this trope, there is a lot to see here, including many surprises that elevate the script above the average fare. The film is entertaining, often clever, and has a unique story. Hopefully, the sequel they have set up will be worthy of notice as well.