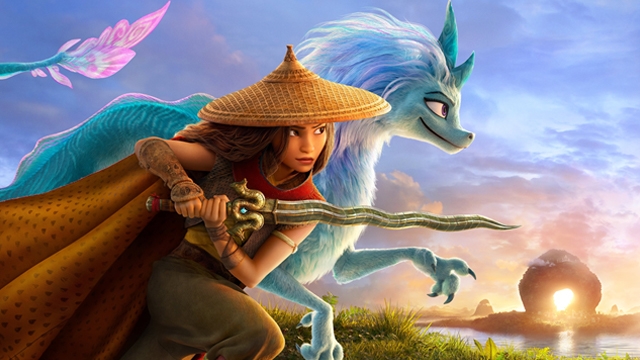 Raya and the Last Dragon, sporting four directors and eight writers, is the Disney animation department's latest release. As with most Disney films, it is visually stunning, but the story and the lesson it tells are the most beautiful aspect of the film.

Benja (Daniel Dae Kim) has just tested his daughter Raya (Kelly Marie Tran), so she may become a guardian. Her task is to protect the Dragon Gem – the final relic of a battle 500 years in the past, in order to prevent the monstrous Druun from wiping out humanity. Her timing is perfect, as Benja has called the fractured tribes of the land to meet so they can mend their distrust of each other. Unfortunately, one tribe attempts to steal the gem, resulting in its shattering. The destruction also releases the Druun, which once again devastates the already suffering land. Each of the tribes escapes with one shard of the gem. Now, Raya must overcome her fears and mistrust to reunite the pieces and save her land from complete annihilation.

The script is well-written and timely, with a story that flows smoothly from beginning to end. The characters, even the small ones, are both enjoyable and believable. Their motivations match their actions, although to stay within the time frame of the film, they frequently overcome their foibles too quickly. Although understandable, this is the one flaw in an otherwise outstanding tale. Still, the message that when one stubbornly believes things can only be one way, it is virtually impossible to see them any other way is woven tightly throughout.

Because of the short appearances and even fewer lines from most of the characters, much of the cast's talents are not displayed. Tran is good as Raya, as is Gemma Chan as her nemesis Namaari. The instantly recognizable Awkwafina is the vocal star. The dragon Sisu's earnest enthusiasm and innocence inspire the hope needed to keep the narrative moving, and she delivers flawlessly.

As with most Disney films, the animation is crisp and clean, flowing from one scene to another. Like Moana, the new style of digital animation the studio uses fits the characters and story perfectly. The soundtrack follows the viewer through the story’s scenes rather than rolling over them, from the opening moment right through the final credits.

It is very appropriate that so many directors and writers are involved in this feature that focuses on cooperation, overcoming differences, and alleviating even the most valid mistrust. In this, Raya and the Last Dragon cements its place among Disney features that children will adore. More importantly, adults can use the tale to teach an essential lesson to their children, and perhaps themselves as well.