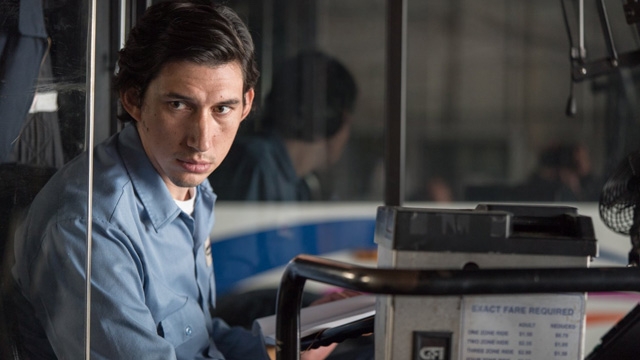 Paterson (Adam Driver) is a bus driver in Paterson, NJ. He wakes up (without an alarm) every morning next to his wife Laura (Golshifteh Farahani), pours a bowl of cereal, and writes poetry in a notebook. He walks to the bus depot early to allot a few more minutes of pen-to-paper time before his boss Donny (a comically stressed-out Rizwan Manji) sends him out on his route. When he gets home at night, the lanky, taciturn Paterson reads some of his favorite poems by William Carlos Williams (the most famous native of Paterson, NJ, whose aura dances all around the film) and dines with Laura. Later, he takes his English Bulldog frenemy Marvin for a walk, stops off for a beer at the corner bar, and comes home.

Meanwhile, the stay-at-home Laura crafts cupcakes, shower curtains, and dresses that all share the same black-and-white geometrical pattern. She dreams of being a baker one day, but the next she’ll fantasize instead about being a Nashville-bound country singer. She loves Paterson’s poetry and urges him to make copies of his preciously guarded notebook. Writer/director Jim Jarmusch follows their modest, working-class lives for one week in this minimalist treasure of a film.

The movie is a quiet analysis of the intersection between creative yearning and the compulsion of reality. Paterson gleans more joy from the process of writing than he does from the dream of sharing his work with an audience. Every bit of his surroundings fuels his creative process: He listens in on riders’ conversations on the bus, eats lunch while overlooking the Great Falls of the Passaic River, and chews the fat at the bar each night. His passion for the written word isn’t demonstrated in fits of explosive inspiration -- it’s as constant in his life as the folded uniform awaiting him each morning. For the many artistic individuals who have an inkling that their work may never be widely disseminated, it’s the passion for the craft that drives them. Jarmusch’s most honorable achievement here is gently demonstrating that quiet craving to create.

Driver is brooding and contemplative, yet instantly personable. His habits feel borrowed from an undefinable “simpler time,” but they’re never insincere. He manages to portray a man filled with romance and wisdom who’s also outwardly laconic and even-keeled. At the same time, Farahani is loyal, eccentric, and quirky without falling into manic-pixie clichés. The pair’s interplay (with Marvin’s growling ever present) is palatable and pure: a symbiotic relationship of compromise, encouragement, and grace.

Jarmusch evokes a mood that is so patently his own, and the current of conversation and routine flows naturally as the week goes by. The auteur (though he may not care for the term) inhabits this self-contained world with a Zen-like grace. Paterson is meandering and untethered, but those with an appetite for poetic storytelling should revel in this beautiful little paean to the trivialities and triumphs of everyday life.