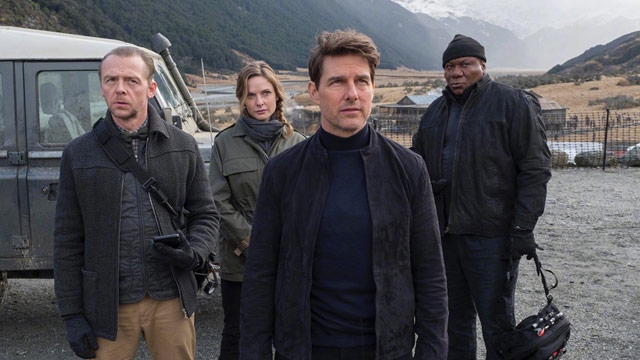 Ethan Hunt (Tom Cruise) is back in this sixth installment of the Mission Impossible film series, written and directed by Christopher McQuarrie (Jack Reacher), who also who also wrote and directed the most recent Mission Impossible film, MI: Rogue Nation. Backed up by returning cast members Rebecca Ferguson, Simon Pegg, and Ving Rhames as his team, the film delivers the well-rounded non-stop action that viewers have come to expect from the series. Sean Harris also returns as nemesis Solomon Lane, with Alec Baldwin repeating his role as Alan Hunley.

When a mission to intercept three plutonium spheres goes wrong, Ethan must find a way to recover them and prevent a terrorist organization known as The Apostles from weaponizing them. Erica Sloan (Angela Bassett), director of the CIA, has doubts about Hunt’s abilities after the botched operation, so she insists that he add one of her agents to the team. This is what brings brash and overconfident August Walker (Henry Cavill) to the team, creating further tension in an already strained situation. As time runs out to prevent the destruction of three major religious cities, the clarity of who is working for whom, and to what end, becomes further blurred.

One of the most entertaining things about the entire Mission Impossible series is that so much of the story is implausible, and yet the story is so well-crafted that in the moment of viewing, that doubt does not creep in. Fallout is no exception, and the tale carries the characters and situations along well. Even though the story is very convoluted, it never leaves the viewer feeling lost. McQuarrie, working alone this time, demonstrates a wonderful understanding of these characters, their motivations, and their flaws.

The principal actors know these roles by now and seem to seamlessly step into these characters’ skin. Their ease as they portray these larger-than-life personalities adds a lot to the plausibility. Simon Pegg is particularly notable as Benji. His boyish enthusiasm conflicting with his fear of harm provides comic relief at just the right moments and frequently elicits laughter.

Unfortunately, the skillful female actors remain in the background, perhaps even more so than prior entries. Particularly underused is Angela Bassett, whose well-proven skills are barely touched.

The action scenes, as usual, are over-the-top, although there are a few choppy action moments in the otherwise outstanding cinematography. And, they remain entertaining, going a step further in each outing. While some action sequences do last longer than expected, and longer than most other films could get away with, Fallout makes it all work.

All told, fans of the prior films are likely to enjoy this as much as, or more than, the previous five, as Mission Impossible: Fallout definitely makes its mark as one of the best of the series.