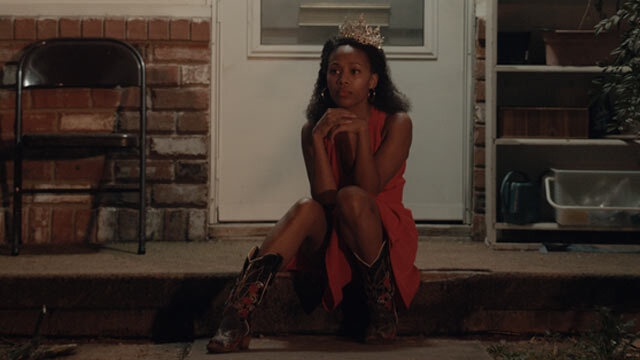 Miss Juneteenth is a drama about a pageant-winning mother who had a promising childhood, only to be foiled by the many things that can easily trip up people in her community. When she sees her daughter heading in the same direction as her own life, she swoops in to try to protect her from the pitfalls surrounding her.
Turquoise “Turq” Jones (Nicole Beharie) hits her high note in life when she wins the Miss Juneteenth beauty pageant, which offers a scholarship to a Historically Black College. But life has more hardships in store, when as a single teen mother, she takes on multiple jobs to make ends meet. Her life goes downhill from here, despite her upbeat attitude, strong work ethic, and desire to always want to help others around her.

When her daughter Kai (Alexis Chikaeze) is old enough to enter the Miss Juneteenth pageant, Turquoise is excited about grooming her to enter and win, so that she can go on to achieve what her mother was never able to. But rebellious Kai is not interested in listening to her mother’s advice about anything and would rather get a scholarship to college her own way: by making the dance team.

Both women struggle to assert their independence and affirm their belief that they are each going about life the right way. Kai is entirely uninterested in what she believes is an antiquated way of doing things, resisting charm school, and hacking her way through Maya Angelou’s poem “Phenomenal Woman,” a requirement to recite at the pageant.  Meanwhile, Turquoise, who remembers the struggle of her own teen pregnancy, frowns on Kai’s dancing as a way out, and she perceives Kai’s boyfriend as a huge threat to Kai’s ability to achieve great things.

Written and directed by feature film newcomer Channing Godfrey Peoples, this film serves as an introduction to an upstart with an amazing eye for the craft of cinema. Quick cuts between emotionally charged scenes that propel the story forward and glimpses into the everyday lives of working-class Black people in Fort Worth, Texas, build a bleak, yet loveable narrative without glamorizing the struggle.

The performances are deep, resonant, and genuine throughout the film. Every character in the cast adds to the emotional honesty, putting their own nuanced spin to add realism to the characters, which in turn makes the story that much stronger.

Ultimately, Miss Juneteenth is a heartfelt, timeless, mother-daughter bonding story. The journey of following your dreams only to watch them collapse and reinventing your dreams so you can have something to work towards is as relatable as it is heartbreaking. Fine performances lend authenticity to a polished, impactful script to create a unique, memorable result.